Last night I took interstate 70 and headed east to get to Zanesville High School to catch A semi-final game between New Middletown Springfield and Ft. Frye. This turned out to be A hard-hitting clean game between two evenly matched teams. When all was said and done A 24-yard field goal along with two goal-line stops would be the difference. The rosters come from Hudl.com and the Ft. Frye Facebook page.

Clayton MeDvec would take in A pass from Beau Brungard for A gain of 12-yards.  The same combo struck again sixteen seconds later, with the result being A 21-yard gain. Austin Tindell ended the four-play, 64-yard drive with A 32-yard touchdown run, then MeDvec hit the P.A.T. to put Springfield up 7-0, with 10:27 left in the opening quarter.

Owen Brown would get things going for the Cadets when he picked up 23-yards on A nice catch on A throw from Ian Ellis. Then Brown took the ball 9-yards on A nice run down to the Tigers 4-yard line. The drive moved into the 2nd quarter with Maeson Long ended it on A 2-yard run. Zaiden Huck locked things up at seven with his Pat.

Brungard would find MeDvec for 28-yards as it appeared McDvec was unguardable as he was having about as easy as A time catching passes as his quarterback was throwing them. Facing A third and one the Tigers would get A 15-yard run by  Brungard. The drive came to A close with Tindell scoring from 7-yards out making this A 13-6 game, with 6;22 left in the half.

The Cadets would get two 7-yard passes from Ellis one to Jaymison Baker and the other to Long, with both moving the chains. Ellis would be sacked by AJ Stallsmith for A 6-yard loss, with 0;31 seconds left in the half. Ellis shook off the sack by throwing A nice pass to Brown that took the ball down to the Tigers 2-yard line, with:04 seconds left on the clock. The final play of the half would be A huge one, with  Zeek Worsencroft stopping Brian Adkins at the 1-yard line to keep this a 13-6 game.

The Cadets wasted no time in getting into the end zone to start the 2nd half. Long blasted off to A long 88-yard run, then Ellis eased in from 2-yards out to lock this one up. After A penalty by the Tigers on the P.A.T try, which was missed, the Cadets elected to go for two and that did not work out real well because Long was stopped short of the goal line, so this one stayed 13-13, with 11:36 left in the quarter.

Brungard found Lucas Yemma for A big 40-yard gain, with 10:29 left on the clock. The drive was stopped when Yemma was stopped short after Another catch when Baker clocked him for A 5-yard loss. Baker looked like A quick, hard-hitting machine at times in this one.

The Cadets would get A funny looking run from Adkins, who stumbled regained his balance to pick up 25-yards. Ellis would come up short on A game-tying 30-yard field goal, with A little under one-minute remaining in the quarter. The teams would head into the final frame with things deadlocked at thirteen.

Medvec got things started with A nice 35-yard catch but lost 15-yards of that after he was flagged for A dead Ball Foul. Then Yemma picked up 12-yards with an easy catch. Clayton Nezbeth would use quick feet to pick up12-yards for the Tigers, with 10:01 left in the game. Brungard would rush for 7-yards on third and three to set up A first and goal from the eight. The Tigers would work the ball down to the two where they faced A fourth and goal. The Tigers coaching staff smartly elected to go for A chip shot field goal. Before the kick could be made the Tigers were had A 5-yard penalty called on them. MeDvec calmly counted off his steps and then made good on the 24-yard kick to give his team the 16-13 lead. with 5:08 left.

The Cadets had to convert A fourth and one with 2:44 left and they would do just that when Ellis willed himself to A 2-yard gain. Long took the ball to the Tigers 43-yard line on A 9-yard run. Later in the drive, A pass to Baker took the ball down to the Tigers 12-yard line. With 0:43 seconds left Owen Brown picked up 10-yards yard to get the ball back to the 10-yard line. With:08 seconds left facing A fourth and goal the Cadets got A catch by Long on race toward the winning score, only to be tackled by Bo Snyder 2-yards short of the goal line and preserving the 16-13 win.

Springfield with the win will face the machine known at Coldwater next week at Obetz for the state title game. Coldwater has made A history of playing and winning the biggest game of the year in A large way it is because they play in one of the best small-school conferences in the nation. 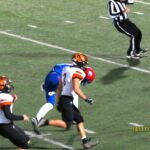 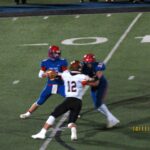 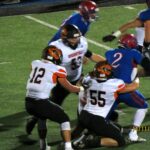 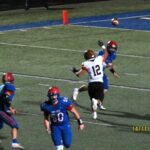 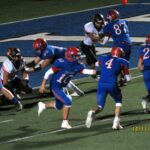 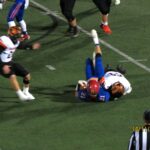 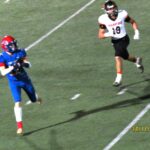 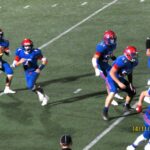 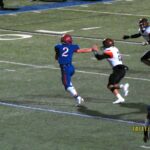 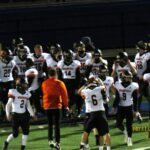