With the first full Friday of high school football set to kickoff, the Hunter Wolverines were set to host the Bonneville Lakers at venerable Ed Mayne Stadium in West Valley City. The low-profile stadium sits close to the field with a four-lane track surrounding the turfed gridiron. With COVID-19 restrictions in place for masks and social distancing, the game was run smoothly and went off without a hitch. Aside from the small contingent of fans eating everything not nailed down in the concession stand.

For the game itself, Hunter started with a bang. A quick three and out forced by their defense led to a one-play 68-yard TD run, to take a quick 6-0 lead only 51 seconds into the new season. Bonneville would then go on to miss a field goal before converting their effort into points with a 47-yard TD pass with 1:04 left in the quarter. Hunter, however, faltered and their return man fumbled the ensuing kickoff. A quick recovery by the Lakers led to six more points, and the game’s first successful PAT. They’d hold that 13-6 lead until after the intermission.

Late in the third quarter, Bonneville would add to their lead with an 11-yard TD pass and a 4-yard TD run to have a commanding 27-6 lead over the host Wolverines. After a series of unfortunate events, Bonneville had the ball back in no time, and scored 30 seconds into the fourth quarter, up 34-6 and seemingly over.

Maybe Bonneville did think it was over, however the Hunter Wolverines did not. Just 79 seconds later, Hunter found the endzone for the second time, a 17-yard TD. After some back and forth, Bonneville had the ball in the waning moments, and were forced to punt. The snap sailed over the head of the punter and he did the only safe play he could, punting the ball with forced out of the back of his own endzone to give up the safety and avoid disaster.

With the free kick ensuing, and on a bit of momentum, Hunter converted that momentum into a 70 yard TD pass with 2:54 left in the game. The two point try was successful, and were now down by only 11 after what once seemed insurmountable. Bonneville was bombarded in the backfield on their ensuing drive, and were forced to punt again. A successful punt on two accounts. The punter actually was able to execute a punt in the right direction, and Hunter’s return man misread the ball and missed it as it bounced awkwardly behind him and to a swarm of white shirts who secured it.

With the clock their only nemesis, the Lakers ground out the rest of the game and were able to line up in the victory formation to secure their first win of the 2020 season. Hunter stabilized themselves after a very tumultuous first 36 minutes and will host Cyprus, who lost 42-0 to Snow Canyon, next week looking for their first victory on the campaign. 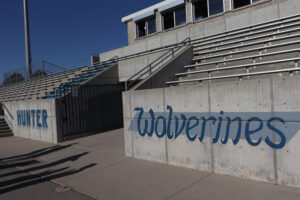 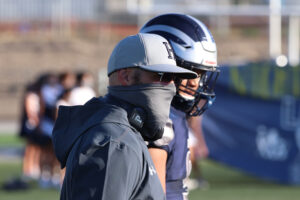 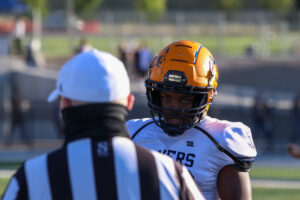 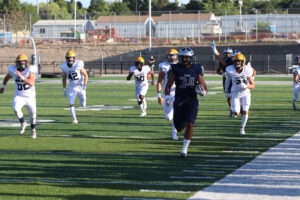 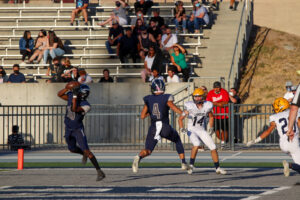 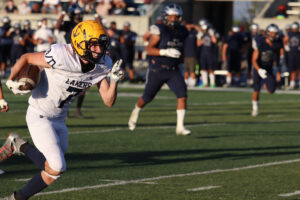 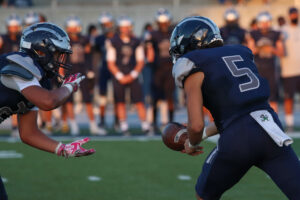 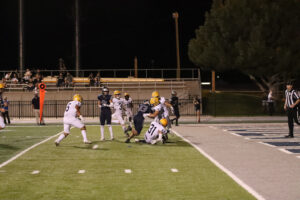 For more photos from this game and others  this weekend, click HERE.