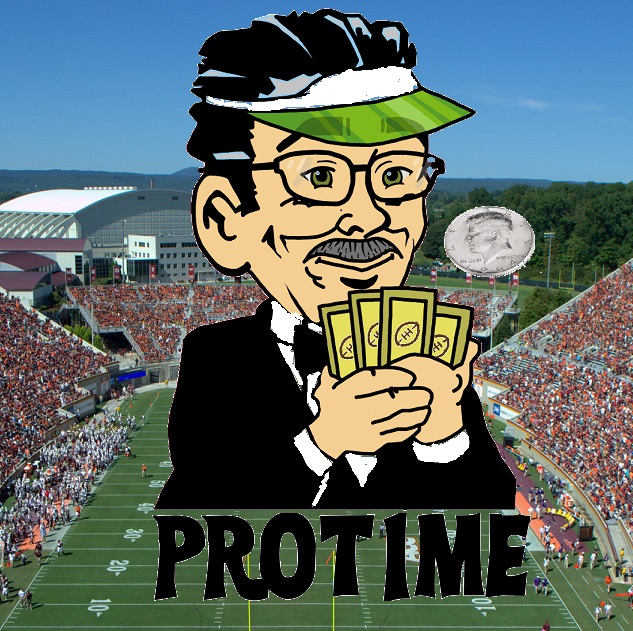 Back in the day when Protime was a long-distance runner and ran virtually every day, he seldom cancelled a scheduled run even if the weather was bad.  Protime was like the postman, he ran in rain, snow, sleet, and hail.  Protime even ran in heat, cold, and wind.  A couple of times he ran (not by design) in a thunderstorm.

Once Protime got caught during a freezing rainstorm about this time of year.  As he came to the top of the hill near his home, he didn’t slow down because there was a possibility that he might beat his best time for his 5-mile run.  Suddenly, Protime slipped on some black ice and slid down that hill faster than a Pinewood Derby car.  Talk about your raspberries.  Needless to say, as Protime limped home, he was upset that he didn’t set a new personal best.

Speaking of being upset, there were quite a few surprises last week and yes Protime predicted some of them, but not all.  The pragmatic prognosticator was 26-7 for the week and is now 275-62 (.816) for the year.  Here are your Consummate Clairvoyant’s picks for the third week of playoffs, and yes, they are plenty more upsets predicted.

Juniata 10-2 @ Meadville 8-3 – Neither one of these teams pass much.  In fact, Meadville has only thrown 31 passes all year!  Juniata’s ground game is anchored by 3 individuals.  Zach Harr leads the Indians with 647 yards and 9 TDs.  Waylon Ehrenzeller and Seth Laub have each scored 8 times.  Ehrenzeller leads the Juniata defense in tackles.  Jonathan Kauffman has 14 of the team’s 54 sacks.  Meadville runs the vaunted Wing-T offense that has gained 4,168 yards this season.  Khalon Simmons has the most yardage on the ground with 1,630 and has scored 27 TDs.  Griffin Buzzell is #2 with 1,278 yards and 18 TDs.  Brady Walker is 3rd in rushing yardage with 810, scoring 15 times.  Buzzell leads the Bulldog defense with 118 tackles to date.  Protime picks the Bulldogs to take a bite out of the Indians 41-28.

Kennard-Dale 10-1 @ Lampeter-Strasburg 10-1 – The Rams won their first playoff game ever last week, but have the difficult task of taking on an experienced Pioneer squad.  Kennard-Dale is led by Jacob Copenhaver, the versatile quarterback who has thrown 12 TDs and has rushed for almost 600 yards, scoring 5 TDs.  The top running back, Steven Lukes, has not played the past couple weeks.  He has 769 yards rushing with 10 TDs scored.  Grant Cooper is one of the keys defensively for the Rams.  He leads the team in tackles and TFLs.  Garrett McCleary has 5 interceptions for K-D.  Lampeter has gained over 4,300 yards of offense so far.  QB Berkeley Wagner has 1,357 yards passing (16 TDs) and 754 yards running (14 TDs).  WR Beau Heyser has 494 yards receiving with 7 TDs.  The Pioneer ground game stats show 5 players with over 280 yards led by Giovanni Malatesta who has scored 11 TDs.  Jackson Heeter is the top tackler for the Pioneers, while Nick Del Grande has 14 TFLs.  Pioneers 38 Rams 26.

Bedford 10-1 vs. Central 12-0 @ Hollidaysburg – Talk about your battle of quarterbacks.  This is a rematch of the Central 41-27 triumph earlier this season.  Mercury Swaim leads the Bedford Bisons’ offense with 1,193 yards passing and 1,026 yards rushing.  Mr. Swaim has tossed 15 TD passes and crossed the goal line himself 17 more carrying the ball.  Trenton Price has contributed 771 yards rushing with 8 TDs.  The Bedford offense has generated over 4,100 yards.  Swaim leads the defense in tackles too, while Kevin Ressler has intercepted 5 opposition passes.  Central has traversed the football fields in 2021 for over 5,200 yards of offense.  The Scarlet Dragons average 48 points a game.  QB Jeff Hoenstine has pitched the pigskin for 3,193 yards and an unbelievable 53 touchdowns.  He is one TD short of the state single season record of 54 set in 2019 by Aaron Tobias of Penns Valley.  In addition, Hoenstine has thrown only 2 interceptions all year in 295 passing attempts.  RB Parker Gregg is another key factor in the Central offense.  He has 836 yards rushing and 16 touchdowns.  He also has 42 receptions for 933 yards and 13 TDs.  WR Eli Lingenfelter has grabbed 37 passes for 855 yards and 13 TDs.  The leading tackler on the Dragon defense is Ethan Eicher who also has 14 TFLs.  Protime’s crystal ball says this game goes to Central 42-34 and Hoenstine sets the state passing TD single season record.

Wyoming 10-1 vs. Scranton Prep 10-0 @ Scranton High School – Huge game in District 2 pits the Warriors against the Crusaders.  The Wyoming Warrior offense has Blaise Sokach-Minnick at quarterback.  He has tossed the agate for 1,178 yards and 15 touchdowns.  WR Rocco Pizano has 756 yards rushing and receiving with 11 scores.  RB Leo Haros has 723 yards rushing and 9 TDs, while Nico Sciandra has 10 rushing TDs.  London Montgomery is the straw that stirs the drink in the S.C. Cavalier offense.  Montgomery has raced for 2,155 yards and 35 touchdowns this year.  QB Sean Monahan has 686 yards passing and 11 TD tosses.  WR Robert Rossi has the bulk of the receiving yardage (531) and TD receptions (8).  Stop Montgomery and you win is what this boils down to.  Nobody has stopped him yet including this game.  Scranton Prep 33 Wyoming 31.

Cornell 9-2 vs. Bishop Canevin 10-1 @ Montour – Either one of these teams are good enough to win the single A District 7 title.  But who will it be?  Cornell’s Raiders are led by the elusive Raequan Troutman who had over 250 yards last week in their win over Leechburg.  He has 885 yards for the year and 12 scores.  QB Sincere Kimbrough has thrown for 926 yards and 10 scores.  He has also rushed for 7 TDs.  Timmy Henderson has amassed 885 yards rushing and receiving and has crossed the goal line 11 times.  For the Canevin Crusaders, QB Jason Cross has 1,365 yards and 16 TDs passing.  Cross has another 463 yards and 12 TDs running the ball.  Lasae Lacks has 38 receptions for 743 yards and 10 TDs.  Xavier Nelson has 31 grabs for 676 yards and 10 scores.  Protime came up with a new way to pick the winner.  He blindfolded himself and threw a dart at his dartboard that was covered 50% Cornell and 50% Canevin.  His dart hit the Crusaders of Canevin.  The score will be 21-20.

Union/AC Valley 9-2 vs. Redbank Valley 10-1 @ Clarion University – Union lost earlier this year to Redbank because they turned the ball over 9 times!  The Falcon Knights of Union are led by QB Bailey Crissman and RB Mikey Card.  Crissman has 965 yards passing with 13 touchdowns.  Card has 926 yards rushing with 7 touchdowns.  RB Dawson Camper has 627 yards, scoring 13 times.  WRs Skyler Roxbury and Ryan Cooper have caught 10 of the team’s 13 TD passes.  Roxbury is a ball hawk on defense with 8 picks.  Carter Terwint leads the team in tackles.  For the Bulldogs of RBV, quarterback Bryson Bain is having a year with 1,632 yards and tossing 27 TDs.  He has a trio of wide outs that have combined for 84 catches, 1,336 yards and 20 touchdowns.  They are Tate Minnich, Chris Marshall, and Marquese Gardlock.  RB Ray Shreckengost has lugged the ball for 790 yards, scoring 14 TDs.  Zeldon Fisher leads the Bulldogs defensively.  The team has an amazing 92 tackles for loss.  Protime flipped a coin because if Union/AC Valley does not have 9 turnovers it will be close.  Bulldogs pull out a 21- 20 victory.

Harrisburg 22 Wilson West Lawn 17 – Both teams love to grind it out on offense, especially Wilson.  Protime’s crystal ball says this cat and dog fight will find the Cougars just having enough to collar the Bulldogs.

Pittsburgh Central Catholic 31 Mount Lebanon 28 – It is hard to beat someone twice in a year if they are good.  Mt. Lebo won the first meeting handily.  Protime sees an upset here with the Vikings avenging that defeat to the Blue Devils.

Erie Cathedral Prep 28 East Stroudsburg South 21 – The Cavaliers may be better than people think, but they fall just shy of beating the Ramblers.

Bethlehem Freedom 24 Emmaus 17 – Here is another game in which the tables are turned from what happened during the regular season.  The Patriots will not get stung twice by the Hornets.

Bishop Shanahan 26 Bonner-Prendie 20 – The Eagles escape the clutches of the Friars.

Bishop Guilfoyle 24 Homer Center 23 – Both teams have the potential to go deep into the playoffs.  Protime’s coin flip goes to the Marauders.  This could be the Wildcats third one-point loss of the year.

Allentown Central Catholic 30 Jersey Shore 27 – Protime is predicting another upset as the Vikings defang the Bulldogs in a thriller.

Aliquippa 22 McKeesport 20 – This is as evenly matched as you can get.  The Quips get the nod over the Tigers in a real slobber-knocker.

Karns City 28 Ridgway 13 – The Gremlins beat the Elkers for a second time to advance.

Exeter 42 Cedar Cliff 28 – The Eagles beat the Colts.  Their prize for doing so is a rematch with Governor Mifflin next week.

Southern Columbia 31 Mt. Carmel 13 – In yet another rematch of a regular season game, the Tigers are the victors over the Red Tornadoes.

Pine-Richland 21 Penn-Trafford 18 – Another toss-up game decided by a Protime coin flip.  The Ram players seem to have something to prove and that may be the deciding factor in beating the Warriors.

Northern Lehigh 38 Lackawanna Trail 28 – Protime gives the Bulldogs the edge in this ferocious battle with the Lions.

Central Valley 42 Elizabeth Forward 21 – The nicknames are the same, but the C.V. Warriors are a little better than the E-F Warriors.

Richland 35 Forest Hills 27 – The Rangers are playing well at the right time, but the Rams are on a collision course with Southern Columbia for a third straight year.

Coatesville 52 Ridley 49 – What a match-up, possibly the best of the week!  And to get everyone into the Christmas spirit we have the Red Raiders and the Green Raiders.  Protime is sure of one thing, the Raiders will win, the Coatesville Red Raiders that is.

Grove City 28 Slippery Rock 24 – Protime is planning to witness this great game which will go down to the wire.  The Eagles reverse the tables as the Rockets beat them during the regular season.