Around the 717 for the final time this season 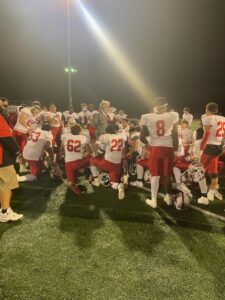 That is a wrap for the Football season for this first time reporter, covered many games, traveled to different parts of the state and will leave with so many grateful memories. With all the teams in the Lancaster-Lebanon League seasons coming to an end, I will be pivoting to winter sports here soon. Let me just say that finishing up the 2021 Football season was an amazing experience. Before I get to that lets recap the final game of the LL League, which if you haven’t heard is merging with Berks County next season.

The Pioneers ended what was a remarkable run for this Senior class, finishing with 2 District titles, 3 Section titles and an overall 31-7 record.

With temperatures barely over the 30s and a ridiculous wind, no team was able to do much offensively.
Both squads did have running backs total 100 yards on the ground with Senior Pioneer Giovanni Malatesta going for 141 and star Crusader Marquese Williams totaling 124. It was Williams 30-yard scamper that proved to be the difference as Bishop McDevitt was victorious 7-0.

For the Crusaders it was their 15th District title in School History and Head Coach Jeff Weachter’s 10th. They will march on to the PIAA semi-finals with a trip to Bishop Shanahan (11-3) next Friday.

Lampeter-Strasburg’s historic defense held up their end of the bargain, holding Bishop McDevitt to one of their worst offensive outputs all season. What they couldn’t afford was three fumbles inside the 20 that ultimately were too much to overcome.

The Pioneers may still be licking their wounds, but it was nevertheless a valiant effort that first year Head Coach Victor Ridenour was certainly proud of. While LS loses several key seniors, they do return playmakers Drexton Frank, Jonathan Mellinger and Hunter Hildebrand, look for the Pioneers to be right back in the title mix in 2022.


I will never forget:

Normally here I give my nod to players or team accomplishments, but this week we are changing it up. This season, after everything all these teams had to endure last year with the pandemic, seemed to bring a true joy to each player, coach and staff member I had encounters with. From the passionate fan bases returning to each staff being so accommodating to a first-time sportswriter, this will be a year I will always cherish. That being said, I want to share a number of moments that made me reflect how lucky I was, but most importantly what High School football is all about.

-A thunderstorm delay could not stop both teams who came into the year with major expectations. Penn Manor squeaked by CV 16-13 thanks in large part to a tremendous defensive effort. What I took away most was the joy the fans had being back in the stadium and Head Coach John Brubaker explaining it best “This is what High school football is all about”. Coach Brubaker then proceeded to give me a nod of thanks for the coverage (it meant the world)

– Robert Footman and Columbia’s historic run cannot be understated. Coach Bud Kyle is doing an amazing job for the Crimson Tide and it showed this year capturing their first section title in over a decade. Week in and out having the pleasure of watching Footman or checking his stat sheet was a blessing and one I will never forget. He was the best player in the league with apologies to Nick Delgrande, Cam Harbaugh and Jadyn Jones.

– Hayden Johnson had just thrown 5 first half touchdowns, when I went to interview him postgame, I joked “What happened in the second half?” a befuddled Johnson said, “We just didn’t execute”. Clearly a humble hard-working kid who is sure to make a name for himself in the league the next two years.

– Covering York @ Dallastown I wasn’t as familiar with the staff or players as they were out of my “designated” area code. It didn’t take me long to notice one of the best players in the state in York Running Back Jaheim Florida White as he carved up the Dallastown defense. Watching him and the Bearcats was fun, but the moment I will never forget is when I went to interview quarterback Sam Stoner he told me Florida doesn’t like to talk. Now maybe it helped that I had gotten to know Stoner the week leading up to the game (he did our preview article) but when I approached Florida he was resistant. If he didn’t want to talk, I would have taken no offense, but when Stoner and center Joden Nelson convinced him to speak, that was heartwarming. You can hear on my interview that White was hesitant (and exhausted), but with the encouragement of both Stoner and Nelson he finally spoke to me and was humble as can be. Look for Florida and his York squad to be a serious contender next season.

– Hempfield Head Coach George Eager after losing in a battle against Central York apologizing to me for the loss. He did not owe us anything, his Black Knight squad had just battled one of the best squads in the state. That is the type of class act Coach Eager is, look for him to do big things at Hempfield.

-Connecting with Legendary Wilson Head Coach Doug Dahms for an interview the week of his game against the Black Knights. It was special to sit back and listen to how Wilson’s Head Coach in both Football and Track goes about his day and how he enjoys life.


– Week 10 not only entailed many teams battling for their playoff lives, but also taking on a ridiculous rainstorm. All teams in the LL League were able to get their games in during the torrential downpour, but they were not happy about it. Manheim Central’s staff was hoping to move their clash against Cocalico to Saturday but to no avail. In one of the coldest, wet games of the year, the Barons clinched a share of the Section 2 title, and I will never forget the joy of the players and staff to get inside out of the rain.

– When Wilson shocked the District with their upset of Central York 14-11. What was more shocking was the way they did it. Sophomore Kicker Ben Rada kicked two field goals with the second one being the difference. What was stunning about all of this is that Wilson had not attempted a field goal ALL SEASON!

– Working with several other writers from various papers was a true joy, many games we worked together on stats, rosters and interviews. After one year of reporting, I have a fond new respect of the work each writer does.


We cannot thank you enough for the support every week, it was truly an honor to cover games this season. Yours truly will be back shortly, stay tuned and thanks again!