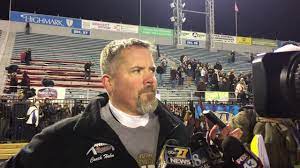 Coach Dave Hahn knows the stakes for this Friday

The battle for the Section 2 title comes down to the final regular game of the season between the Eagles and Barons and to quote Bart Scott CAN’T WAIT!!!! Both squads are shoo-ins for the District Playoffs, but don’t tell them that. At this point in the season do not expect either of these rivals to let their foot off the gas.

Cocalico as we have mentioned runs the Triple Option Offense to near perfection averaging nearly 30 points a game. League leading Rusher Anthony Bourassa and his stout offensive line including South Carolina Commit Ryan Brubaker are very responsible for most of that, but Quarterback Blake Taddei has been overlooked and is having himself a nice season as well.

For the Barons, who bring in one of the top defenses in the LL, Coach Dave Hahn and company know they need to play assignment-based football. Manheim Central outside of one upset loss to Warwick has stayed the course per usual defeating the annual contenders such as Wilson, Hempfield and Cumberland Valley. Coach Hahn is in his 7th season as the Head Coach. He was courteous enough to stop by to discuss topics such as the expectations, replacing a legend and his daily schedule:

Me: You replaced a legend in Head Coach Mike Williams, tell us what that was like and how much it has helped you with him being still very involved with the squad?

Coach Dave Hahn: Mike was a great mentor for many years as an assistant coach for him and now he has been a valuable asset to me as an assistant. He has worked with our special teams the past 7 years and has done a very good job. I think Mike is trying to do what I did for him for so many years and trust me when I say every coach could use someone like that on their staff.
CF: Coaching for a team and town that breathes football, what is that like on a daily basis?

Coach Hahn: I love coaching at Manheim Central, there is an expectation here. It’s better than the alternative. I wake up every day with a hundred things to do in-season and/or out of season, it keeps me busy but I wouldn’t want it any other way. I enjoy doing what we do and hope that it makes a difference in a positive way.

CF: Judd Novak seems to be very quietly having an excellent season (20 touchdowns, 6 interceptions), tell us about his growth over the season?

Coach Hahn: Judd has done everything we have asked him to do. He provides great leadership and displays confidence in his abilities and the game plan each week.I look back on where Judd was a year and a half ago and I see tremendous growth both physically and mentally.
CF: Facing a Cocalico squad who runs the Triple Option almost to perfection, what goes into facing a team that is very one-dimensional but still averages nearly 30 points a game?

Coach Hahn: Cocalico is always a good team because they have very good players, and their coaches do a good job of putting them into position to best help their team.  You add to that the fact that they run an offense that you only see once or twice a year it is going to be challenging. They are a team that is going to have an answer for every alignment you throw at them until they find your weakness and then they will continue to strike.  We have to make sure we are gap sound, getting hands on their lineman and flying to the ball and as you do that watch the back out or wing down the seam on play action.  That is the thing as soon as you think run, run, run they strike with a huge pass play. With all that said, a lot of game planning goes into it.

CF: What does a day in the life Coach Hahn consist of?

Coach Hahn: Usually a 5:30am workout at school, if I don’t do it then it would never get done, the day gets too long. Followed by prepping for my day at school teaching a PE course, two weight training courses and an on-line PE course. Usually around 2:45, I start getting ready for practice, meeting with the team or individual players or handling different situations that arise during the day. We generally practice from 3:30 to 6pm. Depending on the night we will have films after practice or I have QB club meetings, Touchdown club meetings. I typically get home between 7:30 -to 8:30 at night, except for Thursdays. Once I’m home that’s when I will get started on the next days practice plan and share that with the coaches so they can add their input. I typically try to shut it down by 10 or 11, watch a game or a show then the news. Go to bed and do it all over again. the next day.


Kickoff is set for 7 p.m. this Friday at Manheim Central (Weather Pending) I will have your updates covered @carljfred give me a follow.

Over my years as a player/coach/now world class reporter, many things have changed for both the good and the bad. One thing that hasn’t is that if you have 1 error against the Wilson Bulldogs they will always make you pay. In this game that 1 mistake was Hempfield not fielding the opening kickoff properly on the Bulldogs squib kick and as they have for many years Wilson made them pay.

Both squads battled until the end with the Black Knights Quarterback Cam Harbaugh and Wide Receiver Adam Acker doing everything possible to pull off the upset. It was not enough and that 1 error was a big culprit. Wilson welcomes Manheim Township (6-3, 3-1) this week who certainly like their share of the Section 1 title. Hempfield still has an outside shot at a district playoff berth, they will need to take care of a struggling Penn Manor team (5-4, 1-3) and hope Carlisle stumbles in their matchup against CD East.

Player of the Week: Cocalico Running Back Anthony Bourassa (23 carries for 330 yards and 2 touchdowns)

Bourassa carried the Eagles to a last-minute victory over Warwick, gashing them for 14.3 yards per carry. He has been their workhorse all season, for more on his journey check out his interview with Patrick here https://pafootballnews.com/pfn/coach-weiders-go_rout-coaches-notebook-5-questions-with-anthony-bourassa-of-cocalico-and-a-playoff-breakdown/


News and Notes, plus stats

– York @ Central York is the best game in the state this week and that is not a misprint. A cross town rivalry that will see both teams with District and State championship hopes. Central York Quarterback Beau Pribula will get a lot of the much-deserved attention but keep an eye on York High Running Back Jaheim “Florida” White. Florida is the type of back that needs one alley, and he is gone (Just ask the rest of the YAIAA), this will be a heated and entertaining matchup. My partner Patrick Weider will be providing updates give him a follow @footballcoach79.

– Hats off to the Octorara Braves who have had themselves an enjoyable season. Standing at 7-2 they are good shape for a District playoff run thanks to efforts of Weston Stoltzfus (19 touchdowns, 0 interceptions) and Mike Trainor (73 carries, 740 yards and 6 touchdowns). They finish off their regular season traveling to Northern Lebanon (4-5, 1-3).

– Robert Footman continues to light up the record books for the Crimson Tide (7-1, 4-0) he is 78 yards shy of 4,000 career passing yards. Think about that for a minute, he has missed time with a devastating injury, his team was plagued with drops early in the season (see my Donegal story) and they had 1 game wiped out due to covid. What a remarkable feat for a player who is only getting better each week.


– Lampeter Strasburg continued to show why they will be one of the favorites in the District 3 4A playoffs with the thrashing of Ephrata 63-7. Behind Berkely Wagner (12 touchdowns, 6 interceptions) Gio Malatesta (77 carries for 472 yards and 6 scores) and their number 1 ranked defense, expect them to be a contender for another District title.


A lot of teams are playing for their playoff lives, stay tuned for all the action it is going to be a great week!