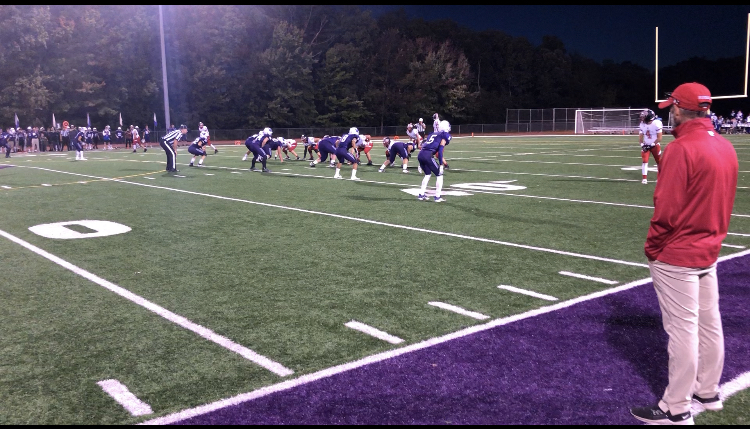 The key to North Pocono’s success this year has been their tenacious defense. Friday night at Wallenpaupack stadium, Greg Dolhons put it on display, holding Wallenpaupack to just 16 yards in the second half in their 13-6 victory over the Buckhorns.

Wallenpaupack found difficulty in the very beginning with the Trojans stonewall defense, who held the Buckhorns to the least amount of yards and points all season. The Buckhorns showed a little promise on their opening drive when Mabret Levant connected with TJ Schmalze on a screen that went for 10 yards and a penalty gave the Buckhorns 15 extra yards, setting them up for some of their best field position all night. But the Buckhorns could not capitalize on it and were forced to punt 4 plays later. Both teams would exchange punts before Wallenpaupack fumbled at their own 20 giving the Trojans great field position. Two plays after the fumble, William Soma would find Dan smith in the back of the end zone for an 11-yard touchdown. The extra point was good and with 6:12 remaining in the first quarter,  the Trojans led 7-0. Not much else would happen in the first quarter, and it came to a close with the Trojans on top 7-0.

The second quarter would see both teams defenses battle it out as the teams exchanged punts. Paupacks lone score of the game would come late in the second quarter with 2 minutes left. Facing a fourth and one Paupack went for it and fumbled. It was recovered by Jordan Santiago for the first down. Santiago would strike again 2 plays later  when he caught a 10-yard touchdown pass from Mabret Levant. The extra point was blocked, and the score with less than 2 minutes in the half left was 7-6 North Pocono.

Mabret Levant 10 yard touchdown pass to Jordan Santiago extra point was blocked and with 2.29 in the half the score is now North Pocono 7 Wallenpaupack 6 @PaFootballNews pic.twitter.com/xdtJwsnPyQ

The third quarter once again saw the two defenses go to work getting stop after stop.  North Pocono put together a great drive late in the quarter which got them to their own 46. Heading into the fourth quarter, the Trojans faced a fourth and one from their own 46. North Pocono Head Coach Greg Dolhon made the call to rely on what has made the Trojans so good this season,: their defense. Jordan Carr punted a beautiful ball to Wallenpaupacks 7-yard line and 2 plays later coach Dolhon decision proved to be prophetic. Linebacker Ty Lafave forced a fumble on the Wallenpaupack 10-yard line that was recovered by AJ Ambrosecchia for a 10-yard touchdown, making the final score 13-6 in favor of North Pocono. Listen to what Ambrosecchia who finished with 5 tackles 3tfl and a fumble recovered for a touchdown had to say about the win:

Listen to what North Pocono DE @aj_ambrosecchia had to say about a win over Division Rival Wallenpaupack @nptrojansports pic.twitter.com/w7CIPTHsri