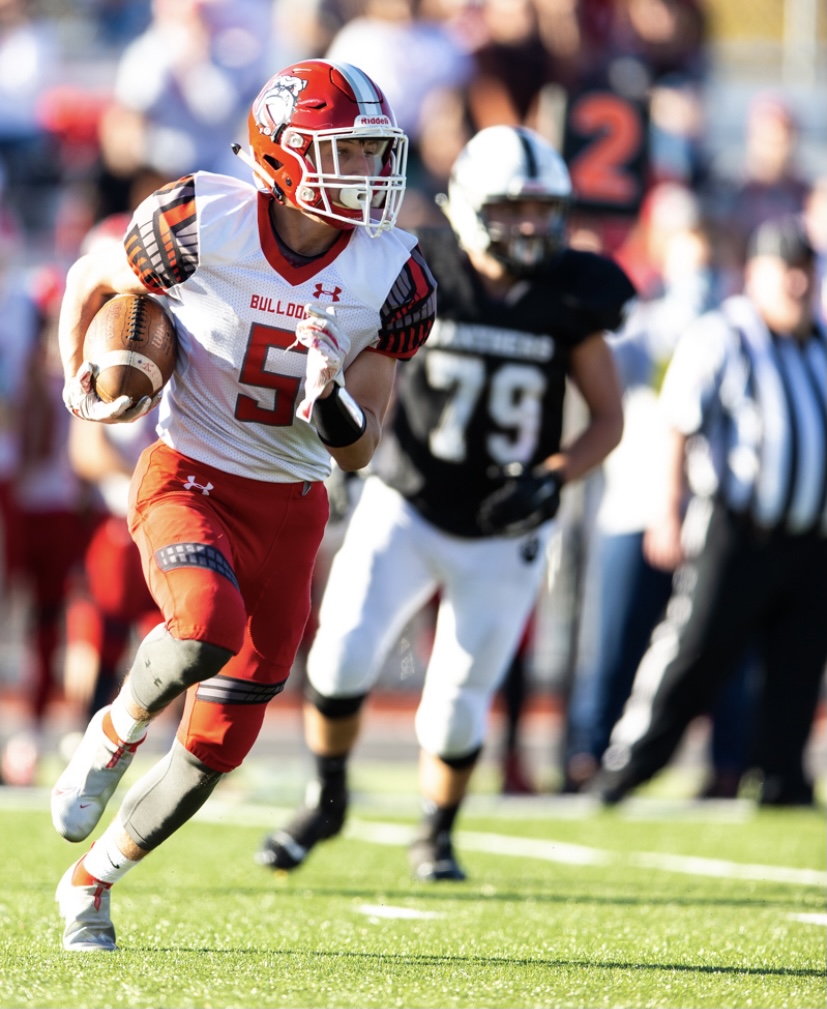 The PIAA state playoffs started this week and Saturday afternoon the Northern Bedford Panthers and Redbank Valley Bulldogs faced off at Windber High School with the Bulldogs coming out with a 28-15 victory. The biggest key in this game was the fierce Bulldog defense that caused six total turnovers and had four sacks. On offense, the Bulldogs utilized field position off turnovers and got two one-yard rushing touchdowns by Senior Kobe Bonanno. 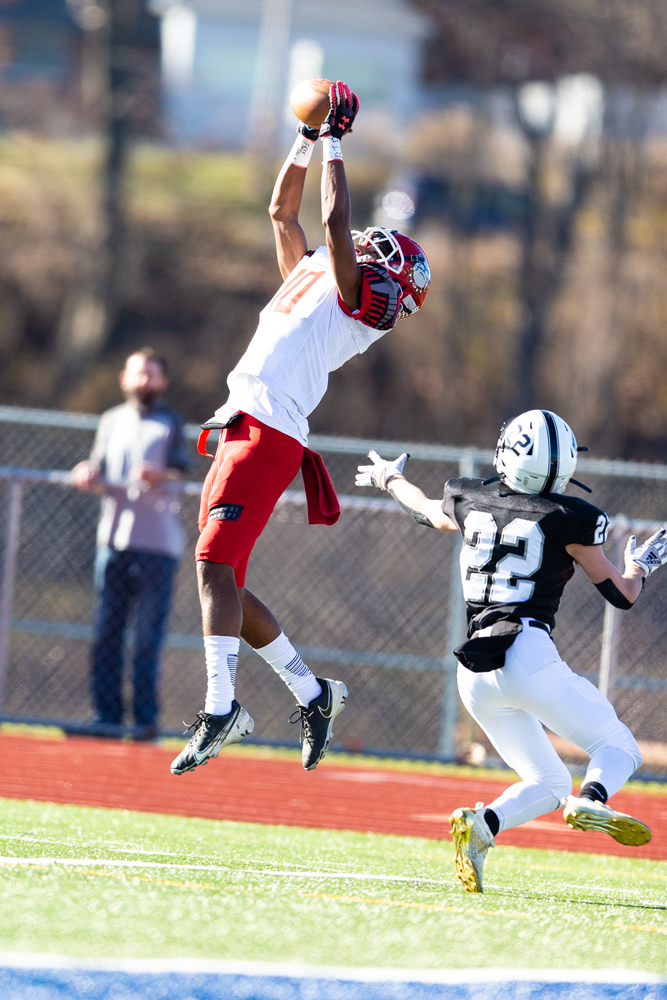 Right from the beginning, it was a struggle for the Panthers. On their second play Senior receiver, Brady Clark took a jet sweep to the outside and fumbled giving the Bulldogs the ball at the 44-yard line. Just two plays later, Bulldogs Sophomore quarterback Cam Wagner hit Junior receiver, Christopher Marshall, from 33 yards out for the touchdown. The point-after attempt by Senior Landon Pence was good, giving the Bulldogs a 7-0 lead with 9:10 to go in the first quarter.

The Panthers defense came up big again on the following possession when Sophomore Tate Minich intercepted Panthers quarterback Thad Leidy at the 44-yard line. This would be the first of four interceptions for Leidy. The Bulldogs offense took advantage of this and drove down the one-yard line where Bonanno would score his first rushing touchdown of the game. The point-after attempt by Pence was good, pushing the Bulldog lead to 14-0 with 7:20 to go in the first quarter.

The Panthers would catch a break to start the second quarter when Wagner heaved the ball downfield and it was intercepted by Senior Cadin Ebersole at the 24-yard line. However, the Panthers couldn’t break the Bulldog’s defense. On first down, Junior Joseph Mansfield burst through the line and sacked Leidy for a loss of 11. The very next play after some confusion between Leidy and his receiver he was intercepted by Marshall and he returned it down to the 27-yard line. The Bulldogs would just need two plays to score. From 10 yards out Senior Hudson Martz rushed in for the touchdown. The point-after attempt by Pence was good, giving the Bulldogs a 21-0 lead with 8:52 to go in the second quarter.

The following Panthers possession resulted in another turnover but not before Mansfield’s second sack on the night. On the interception, it was a trick play designed for the quarterback to handoff and run a route as a receiver. Leidy handed off to Clark and when Clark threw the ball back to Leidy, Bulldogs Senior Trenten Rupp was waiting for the ball. The Bulldogs couldn’t find the endzone and punted the ball back to the Panthers. Again the Panthers would turn the ball over. This time Bulldogs Senior Dalton Bish stepped in front of the pass and returned it to the 39-yard line. The Bulldogs wouldn’t score to end the second quarter making the halftime score 21-0 Bulldogs. 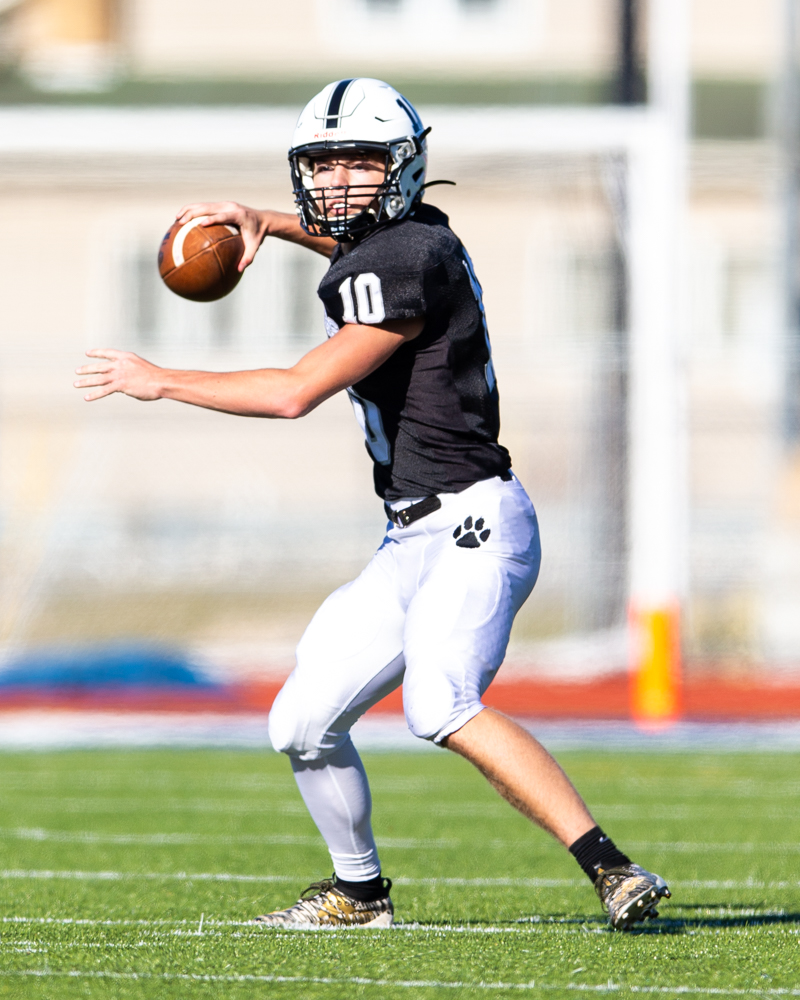 To start the second half the Panthers were finally able to find the scoreboard. After failing to convert on their first possession a punt was downed at the four-yard line. Two plays later the Panthers defense got ahold of Junior running back Brenden Shreckengost for a safety. This would make the score 21-2 with 8:03 to go in the third quarter. The Panthers would receive the ball again but their possession resulted in another Leidy turnover when Rupp got his second turnover of the game. However, just two plays later Clark intercepted Wagner and took the ball 40 yards for a pick-six. The two-point try failed making the score 21-8 Bulldogs with 5:57 to go in the third quarter.

The Bulldogs offense wasn’t able to move the ball and momentum was on the Panthers side. After a punt by the Bulldogs, the Panthers were driving down the field until a fourth and five attempt on the 41-yard line failed. The Bulldogs drove 59 yards down the field and Bonanno punched it in from one yard out for his second touchdown of the night. The point-after attempt by Pence was good, making the score 28-8 with 6:47 to go in the game.

The Panthers would catch another break on defense when Bulldogs ball carrier Schreckengost fumbled and was recovered by Ebersole. The Panthers would turn this turnover into points when Senior Dalton Smith rushed in from two yards out for the touchdown. The point-after attempt was good making the score 28-15 Bulldogs which would be the final score of the game.

For the Redbank Valley Bulldogs, they advance in the PIAA 1A state playoffs and will face Reynolds next week. For Northern Bedford, their playoff stretch is over, but they have a game scheduled for next week against Southern Huntingdon.