Truman Tigers Improve to 2-1 on the Season with victory over Norristown 22 to 12 ! @NtownFootball @HarrySTrumanHi1 @570Football @Sinnysowavy1234 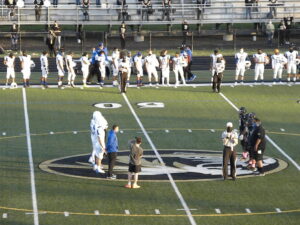 Truman proves too much for Norristown in the end…

Truman began the game receiving the opening kickoff and after both teams would move the ball down the field, drives would stall consistently, a back and fourth tussle in the first quarter that would end in a 0 to 0 score, In the second quarter, it was much of the same as the first, but late in the second quarter, the Truman provided a score when Tiger’s QB Terrell Delp connected with #2 for a 32 yard touchdown reception, with the 2 point conversion good with Delp keeping it himself and running it in, the score was 8 to 0 Truman with 2:04 left in the first half. The Eagles got the ball back in the quarter but time would run off the clock as Norristown couldn’t make anything happen.

To start the 3rd quarter of play, the Eagles grabbed the second half kickoff at the 20 after the kickoff went for a touchback, and went to work, but once again, the drive stalls after they cross midfield.  Truman took over on downs, and started to move the ball as well, especially on one particular play when Delp threw the ball to his intended target #2, and got an assist on the play from the refs back, bouncing it right into the hands of the receiver for a first down on the play.

A couple plays later, Tiger’s running back #2, takes a handoff and runs down field, to what looked to be a nice tackle only to realize the RB body never touched the ground, and kept grinding for more yards, to the Eagles 3 yard line. 1 or 2 plays later, the running back took the handoff and ran it in from about 4 yards out, the failed 2pt. conversion made the score Truman – 14, Norristown – 0 with just under 3 minutes to play in the 3rd quarter. The Eagles got the kickoff and quickly marched down field and within a few plays, Norristown punched it into the endzone, the 2 point conversion failed… BARELY, to make the score now Truman – 14, Norristown – 6 with 2:08 to play in the 3rd quarter. At the end of the 3rd quarter, it was still 14 to 6 Tigers leading the Eagles.

Truman had the ball in the 4th quarter when they faced a 4th and long, and the punter for the Tigers belted a beauty for about 70+ yards with the wind pushing behind him, and a sweet roll for about 20 yards.  Norristown took the ball and marched down the field consuming some time off the clock before they would once again punch it into the endzone to close the score gap to 14 to 12 with 1:44 left to play in the game when Eagles QB connected with I believe #10 of the receiving core. 2 point conversion once again no good.  Truman would recover the onside kick try by Norristown and run a play, kneel down on one, a penalty, then what I thought was a trick play on a fake kneel down, but after review, I was incorrect, either way, Truman running back took the handoff and ran for 18 yards to the endzone for the score, with a converted 2pt try, the Tigers increased their lead to 22 to 12 with just 1:14 left to play in the game.

After a couple plays, 1 of which was a big stick and sack, Norristown had one play left, a pass deep down the middle of the field, unfortunately, it was intercepted and the Tigers would take a knee twice to end the game, and win by the score of 22 to 12 ! Norristown drops to 1-1 on the season.

Check back for photo gallery update !