Wilson outlasts Hempfield to clinch a share of Section 1 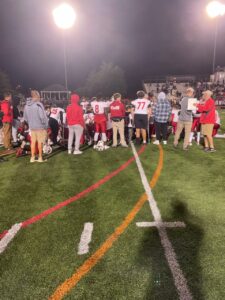 Jadyn Jones took a handoff up the middle from 14 yards out with 30 seconds left to give the Wilson Bulldogs (6-3, 4-0) their 4th straight victory. Hempfield (5-4, 2-2) would drive up to the Wilson 45 but Cam Harbaugh’s last second hail-mary was too far out of the endzone. Ball game over. “We have everybody healthy now, everybody’s back, everybody is healthy” Head Coach Doug Dahms said, “We are starting to learn how to play together”.

Starting things off on Senior Night at Hempfield Wilson recovered the opening kickoff at the Black Knights 24. Four plays later Senior Quarterback Brad Hoffman took a keeper up the middle for an 8-yard touchdown (7-0). Hempfield came right back on the next series and finished it off with Cam Harbaugh 21-yard touchdown pass to Evan Smith making it 7-7.

The Bulldogs first 10 offensive plays consisted of runs (a common them for them on the night). On Hoffman’s first pass of the game, he found Freshman Brady Kline for a 13-yard touchdown strike to bring the score to 14-7. It appeared at this point the shootout was on but both teams clamped down defensively for a good portion of the rest of the game. The Black Knights survived another special team’s gaffe on a failed fake punt attempt at their own 24. They forced a Hoffman fumble three plays later to recover back at their 18.

Midway through the second quarter all-league running back Jadyn Jones started to find his groove. He finished off his third straight carry of the drive with a 2-yard touchdown run and brought the score to 21-7. Harbaugh and company came right back, with the Senior finding his favorite target Adam Acker (5 receptions, 129 yards) for a 61-yard reception to the Wilson 2. Two plays later, fellow Senior Stephen Katch plowed his way in for a 1-yard score making it 21-14. The score remained that way going into halftime.

A scoreless third quarter passed as both teams had long drives negated by penalties, lead to a very entertaining 4th. On third and 11 at their own 32 Harbaugh (15-26 280 yards, 2 touchdowns) fired a missile to Andy Garcia who did the rest for a 68-yard touchdown pass tying the contest at 21. The Black Knights appeared to have all the momentum when Thomas Minnich stopped Jones on 4th down with 4:51 left.

Harbaugh’s third down pass fell incomplete to Acker though and they would have to punt, putting Wilson back at their 22-yard line. The Bulldogs then marched 78 yards on 7 plays, all on the ground, capped off with Jones’s second score of the evening. The Senior had an excellent night finishing with 139 yards on 21 carries. Speaking with him after the game, Jones knew what they had to do “We knew what we had within us, we practice that two-minute drive every week in practice.” Jones replied. “Injuries hit us early, but now that we have everybody and we’re healthy we are rushing the ball really well”.

Wilson who clinched a share of the Section 1 title returns home for a showdown with rival Manheim Township (6-3, 3-1) next week. Coach Dahms knows what is at stake; “We are gonna have to do what we did tonight and control the clock”. Hempfield still has a shot at a District playoff berth, will travel to Penn Manor (5-4, 1-3).