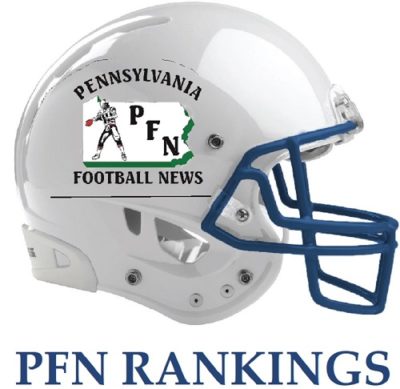 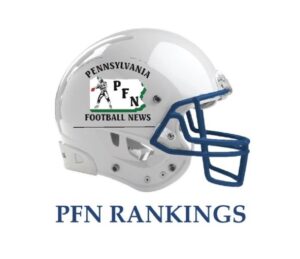 Sor for the first time this season we’ll dig into what went into the rankings this week. Though some of the top teams lost this past weekend, we don’t tend to punish teams for losing to strong, out of state teams. After all, these ARE the PENNSYLVANIA rankings.

In 6A we had some movement, up mostly due to the fact that NA and McDowell played each other and it was a close battle. Also losing this week was Harrisburg, to a Manheim Twp team who’s only loss came to ranked Cumberland Valley. Township jumps into an HM slot. We know, how does Harrisburg remain ranked ahead of them? **Important note: We consider HM basically 5 teams at #11.**  So basically, TWP is #11, 2 spots back.

In 5A, we only dropped Tep one because that loss was thisclose to a out of state powerhouse AND we moved UD to the 1 spot based on their win over a still strong North Penn team. Cards are strong with O’Sullivan at the helm. We’ll see what Tep has for PA this weekend when they take on 10th ranked Malvern Prep. **Another note: yes, Malvern Prep. This is PAFootballnews, not PIAA football news. We DO wish the inter ac would change thier rules and join the PIAA but we still cover PA teams.  New are Peters Twp and Elizabethtown in HM.

In 4A nothing changed in the top 10. Beca and the Pioneers join the HM.

It’s 3A that saw the most movement. Welcome to #1 Wyomissing. BVA drops one spot with that close loss to third ranked 4A McKeesport. The Dragons were handily defeated by Penn Cambria who takes their spot. in the top 10. We’re still tryin to figure out D10 in 3A. Hickory drops out after that loss to Sharon. We could have replaced GC, who lost to very strong Neshannock and Farrell, with Sharon but decided we’d let them decide who gets that spot this Friday. In is Oil City with Ethen Knox running wild. Key for them: In two weeks they face Meadville. Tyrone jumps into the #10 spot. 3A in D10 is a crap shoot with the Rockets, GC, Sharon and GC all battling each other all season.

There’s a new #1 in 2A for the first time in a long time. The mighty Lancers knocked the Tigers out of the #2 spot with a commanding win. Farrell goes to #1. The Steelers are looking like the strongest 2A team in PA. Not far behind though is Westinghouse and another team that has a legit chance to hand SCA another loss, Mt. Carmel. The only other real movement are Western Beaver and Neshannock in the HM spot. Those two face each other this Saturday in a huge D7 matchup.

And finally 1A. The lowest bracket also saw quite a few shakeups. #3 Reynolds lost a close one to Sharpsville, Homer-Center tumbles after a loss to Penns Manor who enters at #9. Old Forge drops after their second loss. They will likely be the 1A rep in D2 but after Mid Valley they face Lakeland and Lackawanna Trail, two very tough games. Keystone jumps into the 10 spot. Welcome to #11 Eisenhower.

Well, that’s what we came up with!