Warrior Watch: Penn-Trafford players to look out for in 2020 and beyond! 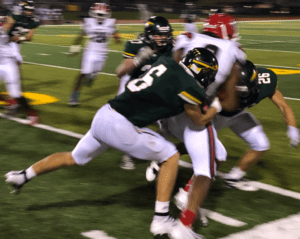 The Penn-Trafford football team finished the decade with 90 wins, 2 trips to Heinz Field, 9 playoff appearances out of 10 years, and many records broken in their wake. To ring in the new decade, here are 10 players to look out for next season and beyond. 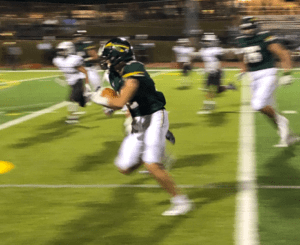 One of the highly touted recruits in the class of 2021, Ethan Carr is definitely a major player for the Warriors. With 1,285 yards in offense plus his kick and punt returns, Carr has 1,836 total yards. He also had 23 total touchdowns. With all his passing attempts, receptions, carries, and returns, Carr had 110 touches and 21% of the time he scored a touchdown. His top two stats were his receiving and kick returns. He had 764 yards on 42 receptions and 10 touchdowns. His kick returns totaled 499 yards on 13 returns and 3 touchdowns. He averaged 38.38 yards per kick return. As a wildcat quarterback and as a wide receiver, he had 28 carries for 323 yards and 8 touchdowns. He also had 22 passing attempts as a quarterback with 8 completions and 198 yards and 2 touchdowns. Carr wasn ́t just an offensive player. He totaled 28 tackles with 15 solo and 13 assisted as an outside linebacker and safety. His highlight game of the year was against the Plum Mustangs when he scored 5 total touchdowns. He had 3 carries for 107 yards and 3 touchdowns. He returned the opening kickoff 91 yards for a touchdown and he would have one reception for 16 yards and a touchdown. During that game, every time he touched the ball he scored except once. He was named to the first-team all conference team for the Big East Conference and the 2nd-Team PA Coaches 5A All-State team as a wide receiver. During the course of the season, he also was offered a scholarship by the College of William & Mary in Virginia. The sky is the limit for Ethan Carr. Look out for him to set records and get more college offers in 2020.

The first of the Frye twins mentioned in this article is Mason. Although smaller in stature compared to the average player he flies all over the field on defense. Mason made 67 total tackles, 3 forced fumbles, and 1 interception as a defensive back. His 42 solo tackles were third most on the team which was only two behind the player with the second most, Cole Defillippo. His ability to quickly navigate around the field, landed him on the first-team all conference as a defensive back. On the offensive side of the ball, Mason had 6 catches for 144 yards. That will have a lot of new parts but experienced players like his brother Nate and Brad Ford. Mason has been getting some looks from colleges but no official offers have been made at the time of this article. His size may be a factor but he is a player that hits and plays above his weight class. Look for Mason to be a playmaker on the defensive side of the ball and a major increase of production on the offensive side.

The phrase ̈identical twins¨ could not be more true for Mason and Nate. Despite his stature, Nate was also a huge playmaker for a stout Warrior defense in 2019. He made a total of 74 tackles which was the second most on the team, only behind a record setting year by senior Chase Burk who had 138. He also managed 1 interception and a defensive touchdown this season. His defensive play landed him on the second-team all conference. On the offensive side of the ball, Nate had 10 rushes for 50 yards and 2 touchdowns. He also managed to have 3 catches for 20 yards. Next year, look for both Frye twins to lockdown other teams defensively and to get more plays their way on the offensive side of the ball. If both brothers stay healthy, don’t be surprised if you see both make first-team all conference and get some college offers. Nate, just like his brother, hits and plays above his weight class.

Chase Vecchio, younger brother of former Penn-Trafford and RMU wide receiver standout Tim, has a nose for the football. He put on an absolute show at the WCCA 7 on 7 tournament at Latrobe in the summer. During the season, he had 53 tackles, 38 solo and 15 assisted, with 2 sacks and 1 fumble recovery. All that landed him as an honorable mention all conference. On the offensive side of the ball, he did not lack production with 12 catches for 286 yards and 2 touchdowns. He is also a starter and captain on the varsity basketball team this season. Chase is a great athlete and knows how to use his talents on the field or court. In 2020, Chase will look to leave his own legacy as a Penn-Trafford Warrior and make a bigger impact on offense. 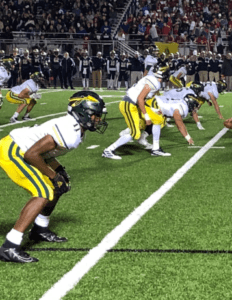 Brad Ford sets up in his defensive stance before a play against Franklin Regional (Photo Credit: Rush Pedder)

After both Caleb Lisbon and Sam Fanelli went down with injuries against Mckeesport, someone needed to step up in the backfield and that was Brad Ford. Originally listed as a wide receiver to begin the season, Ford stepped in as the running back. When he came into the Mckeesport game, he got 86 yards on 12 carries and a touchdown. He completed the season with 302 yards on 65 carries and 4 touchdowns. He also recorded 36 tackles, 25 solo and 11 assisted, as a defensive back. He was voted as an honorable mention all-conference at running back. Brad will try to fill a hole left in the backfield by Caleb Lisbon and Sam Fanelli in next season and add more experience to a defense that is losing the same two playmakers.

Stepping into the shoes left by the leading scorer in Penn-Trafford football history, Keaton Heir, are huge shoes to fill. However, Nathan Schlessinger filled shoes very well in his sophomore year. He recorded 48 PATs and 3 field goals. He also had 16 touchbacks and averaged 47.7 yards per kick on kickoffs. Nathan was also voted honorable mention all-conference as a kicker and named to the first team all-conference in soccer. Look for Nathan to be more of a game changer and increase Penn-Trafford ́s scoring chances in 2020.

To put it short, you can’t teach size and Robbie Bartrum has lots of it. In addition to the size, he has technique and strength. He started at tackle and guard this season. He will be the only starter returning from last years offensive line. With the loss of Josh Cheplick as the nose tackle on Penn-Trafford ́s odd front, Robbie will most likely replace him. He will continue the legacy of nose tackles during the John Ruane era for the Warriors like Logan ̈Bubba ̈ Hawkins, who played on the Warriors’ 2015 and 2017 teams that reached Heinz Field. Logan now is the starting nose tackle for the Akron Zips. Look for schools to offer scholarships to Robbie, not just his size but his almost surprising athleticism.

One of the lesser known names that will be lighting up scoreboards for the Warriors over the next two years is Cade Yacamelli. Cade got some good playing time towards the midpoint and end of the regular season. He made the statement with his given opportunities. He touched the ball 38 times and had 515 yards and 6 total touchdowns. Every time he touched the ball, he averaged 13.55 yards. Two of his touchdowns came on kick and punt returns. He averaged 11 yards per carry with 3 touchdowns on normal handoffs, and he had 8 catches for 86 yards and another touchdown. Look for Cade to be a second option for the Warriors on returns and be another athletic weapon on offense.

One of the players waiting in the wings for the Warriors is Chris Popovich. Chris sat behind amazing receivers like Chase Vecchio, Noah Allen, and Ethan Carr but he got opportunities and made the most of them. He had 3 catches for 25 yards, averaging just over 8 yards a catch, on varsity. He did have highlights on the junior varsity field with an 84 yard touchdown against Franklin Regional and even throwing a pass on a philly special type play. His biggest highlight came on varsity on the only punt he fielded all year he, returned in 56 yards to the endzone for the touchdown. Chris will be a good option for the Warriors who certainly have the athletes to spread the ball around in the pass game.

The other player making a run at the starting quarterback position is Carter Green. Carter was the main player at quarterback on an undefeated junior varsity team and an offense that outscored teams 302-54. He was a contributor on special teams on varsity and when he stepped in at quarterback he went 6 for 11 resulting in 32 yards and 12 carries for 37 yards and a touchdown. He also lettered and started in lacrosse at attack during his freshman year, recording 25 goals and 15 assists, and he is expected to start this season. He also plays on True Lacrosse ́s national team. Carter would fit into Penn-Trafford ́s read option offense with his athleticism and quick decision making. He could split time with Ethan Carr at quarterback next season.

These 10 players have the ability to make an impact in the 2020 season and, for Cade Yacamelli, Nathan Schlessinger, and Carter Green, the 2021 season as well. These players will fill critical roles left open by the graduating 2020 senior class. In a few years, you could see many of these players playing at the next level.