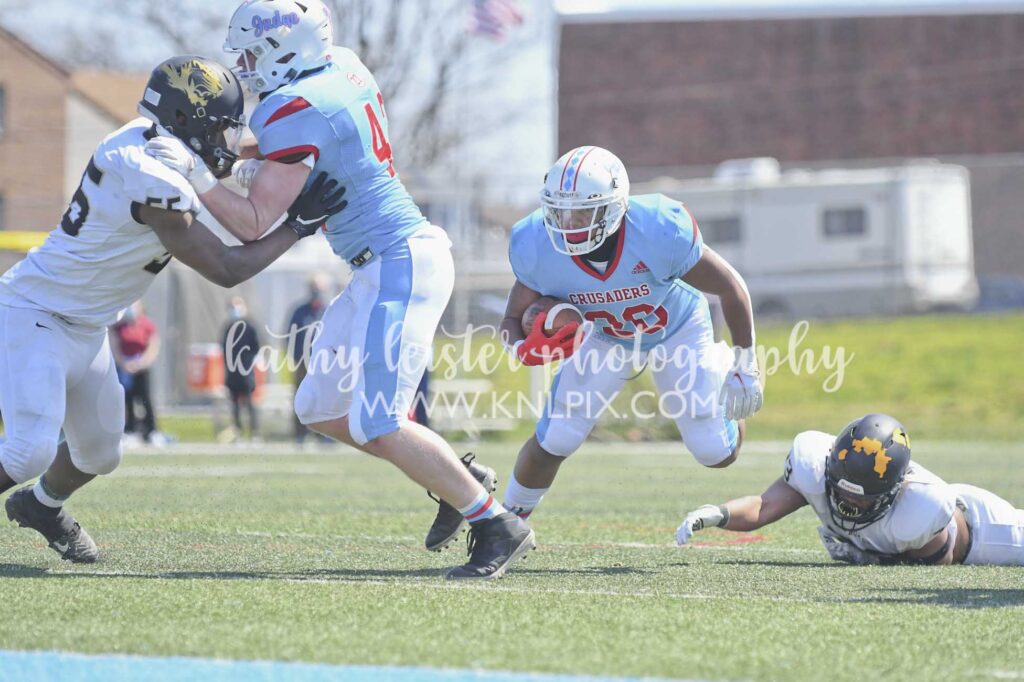 Father Judge’s power running game scored on two of their first three plays to start the fourth quarter,  stretching a tenuous three point lead over Harry S. Truman, to an unsurmountable  seventeen. Judge’s Junior running back  Billy Whitely burst through a hole scoring from the sixteen yard line on the first play of the Forth Quarter. After a Truman turnover, Freshman phenom Eric Smith banged in from the six, giving Father Judge a 31-14 lead. In a flash a tight game had turned comfortable, forcing Truman in to desperation mode.

The game began as a defensive battle with neither team able to mount a cohesive drive. Each time either of the offenses would string together a couple plays, the opposing defense would make a big play on forth down. The scoring finally opened, when after a short Truman punt, Judge was able to pound out a fifty-one yard drive. Judge’s outstanding offensive line led by Junior Shane Hartman began to open up holes for Smith and Whitely. On second and goal from the two, Eric Smith pounded through the Truman defense across the goal line,  strong legged kicker John Westfield added the extra point giving Judge lead 7-0.

After a series of three and outs by both teams, Judge got the  ball back on it’s own forty, following several nifty runs by Smith, Quarterback Justin Nikololous was driven out of bounds Truman’s outstanding linebacker Jaxson Walters. With Nikololous injured on the play, Judge lined up on a forth and one from the thirty one for what looked like a punt. Instead Judge perfectly executed the swinging gate, snapping  the ball to up back who ran around left end for the first down. With Sage Taylor taking over at Quarterback the drive stalled at the twenty seven, from there Westfield rocketed through a forty four yard field goal making the score 10-0 . 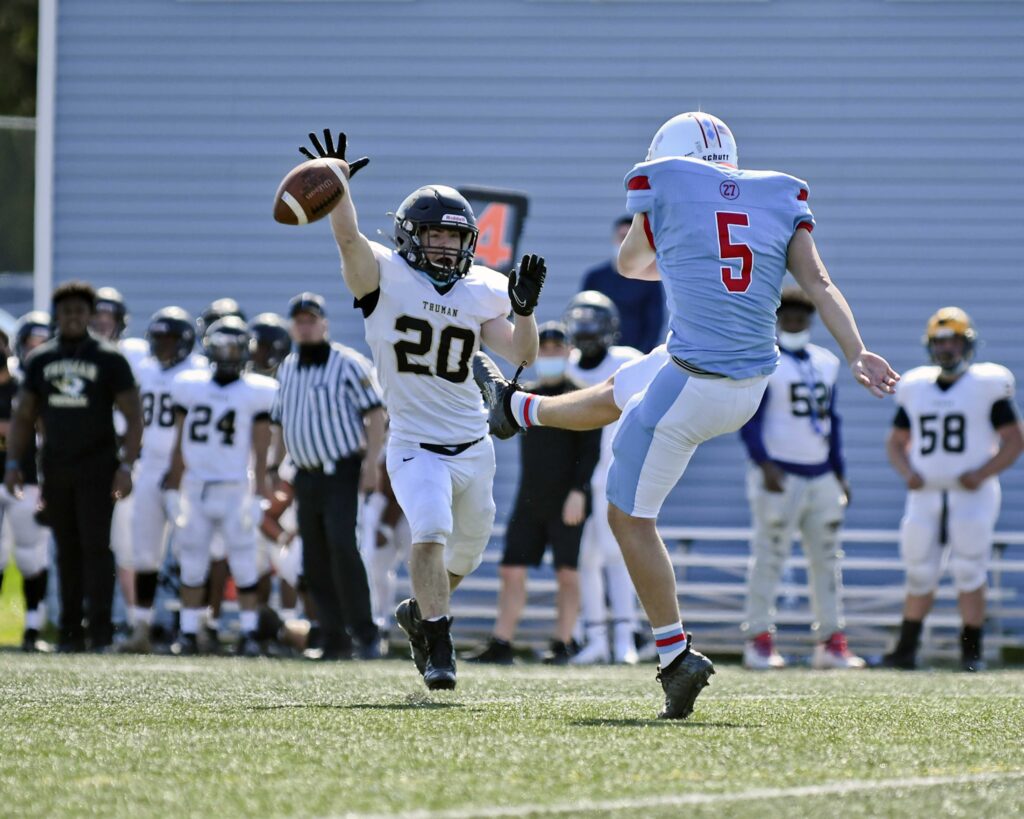 In the second quarter Truman was able to drive the ball using running backs  Sincere Thomas and  Kobe Pena to move the ball into Father Judge territory, from there Judge’s D-Line took over, on successive plays Shane Hartman batted down his second of three passes on the day, followed by the entire D-Line sacking Terrell Delp. It seemed the half would end 10-0 after Truman failed to field a punt that was downed at the five yard line, with only thirty seconds to go in the half. Instead Truman’s QB dropped back attempting two passes, each almost being intercepted. On third down with twelve seconds to go, Delp dropped back, pump faked to Thomas then aired it out down the sideline hitting Thomas in stride for a ninety five yard score. The two point conversion was good making it 10-8 at half.

The second half opened with Truman abandoning the run, they were able to move the ball to midfield but the fifth straight pass of the half proved costly. Judge’s cornerback Jake Marquis undercut the pass racing untouched to the end zone making the score 17-8.

Truman returned the kickoff to the forty five. Five straight called pass plays got the ball deep into Judge territory, after mixing in a few runs, Truman faced a forth down and two yards to go from the eight. Judge was flagged for a neutral zone infraction, giving Truman a first and goal from the four. From there Pena ran between the tackles making the score 17-14.

Judge would take the kickoff back to the forty eight yardline, then methodically ran up the middle with Whitely and Smith taking turns running behind the big horses. Truman’s front seven seemed to get worn down. When the third quarter ended, Judge had driven to the sixteen yardline, setting up the fateful start of the forth quarter, which would seal the victory for Judge.

Following the scorching hot start to the forth quarter by Father Judge, neither team was able to move the ball. Late in the game Billy Whitely scored his second touchdown of the game to cap the scoring giving, Father Judge a home victory over Truman 37-14.

With no practice allowed after Wednesday during Holy Week, Father Judge’s Head Coach McArdle choose to emphasive the positives  of playing on a Monday afternoon to his players, rather than bemoan the lack of practice time. He complemented his defense on their ability to regain their focus after giving up the long tough down just before half.

Truman will play Reading Friday, Judge will travel to Norristown for a showdown also on Friday night. Both games will have huge playoff implications.

Gallery by Kathy Leister (visit her site for more https://www.knlpix.com/) 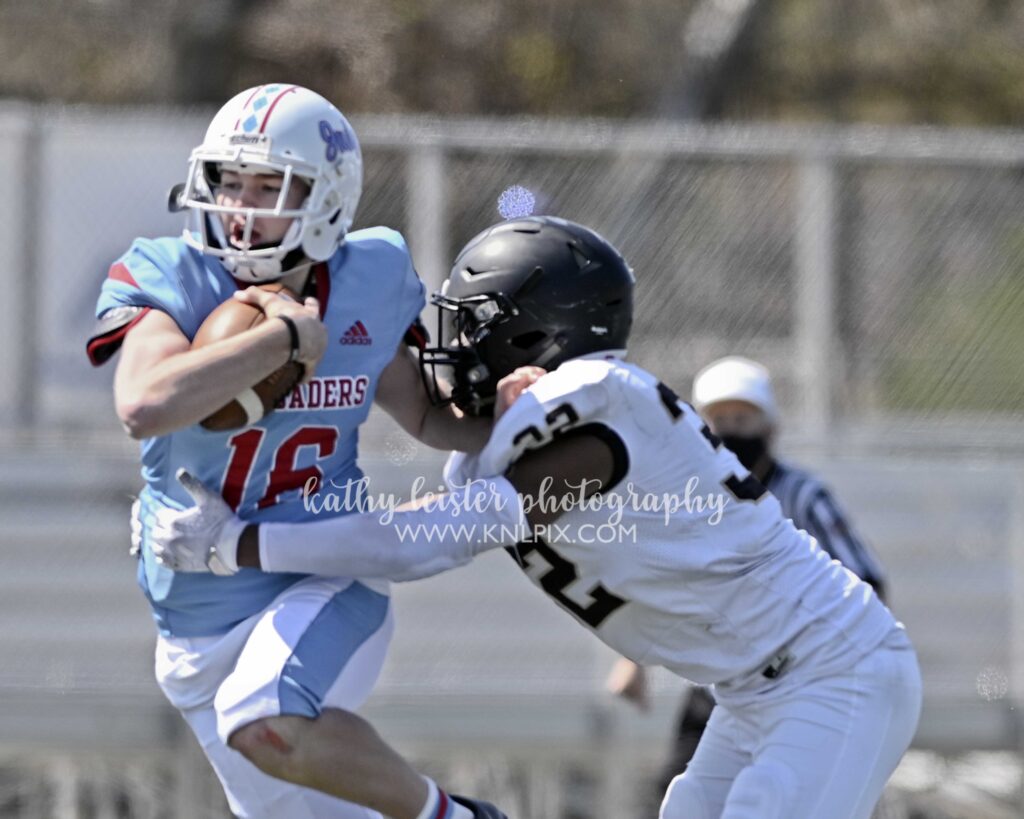 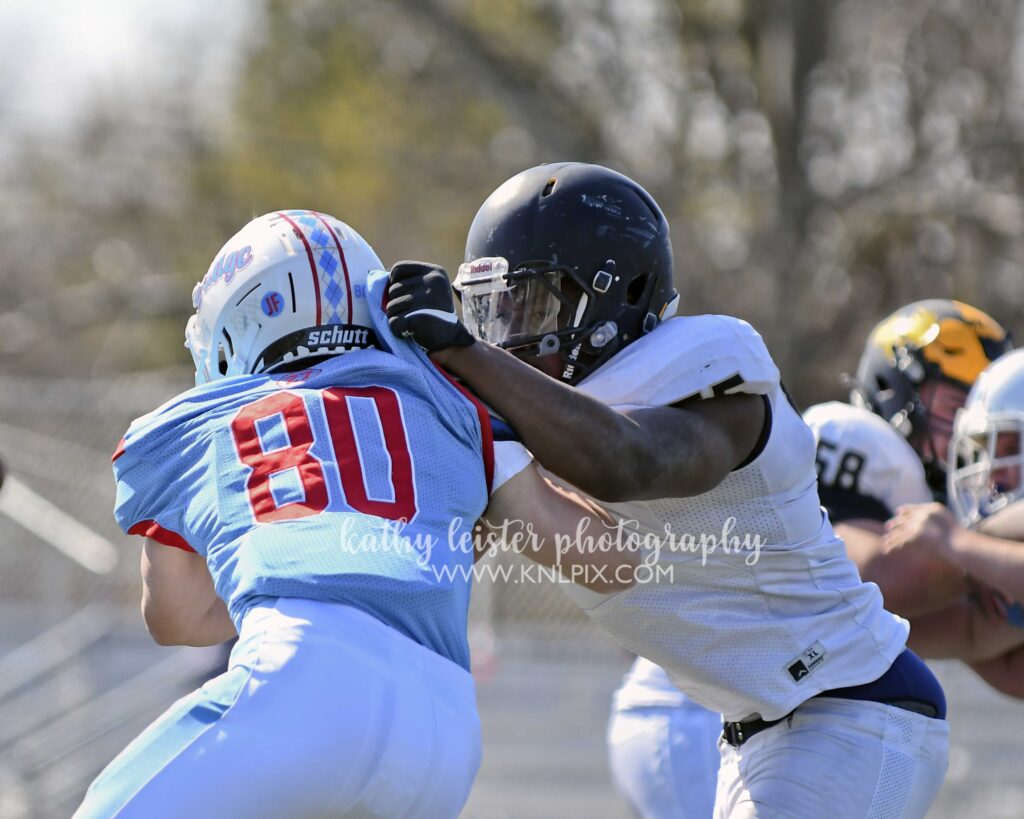 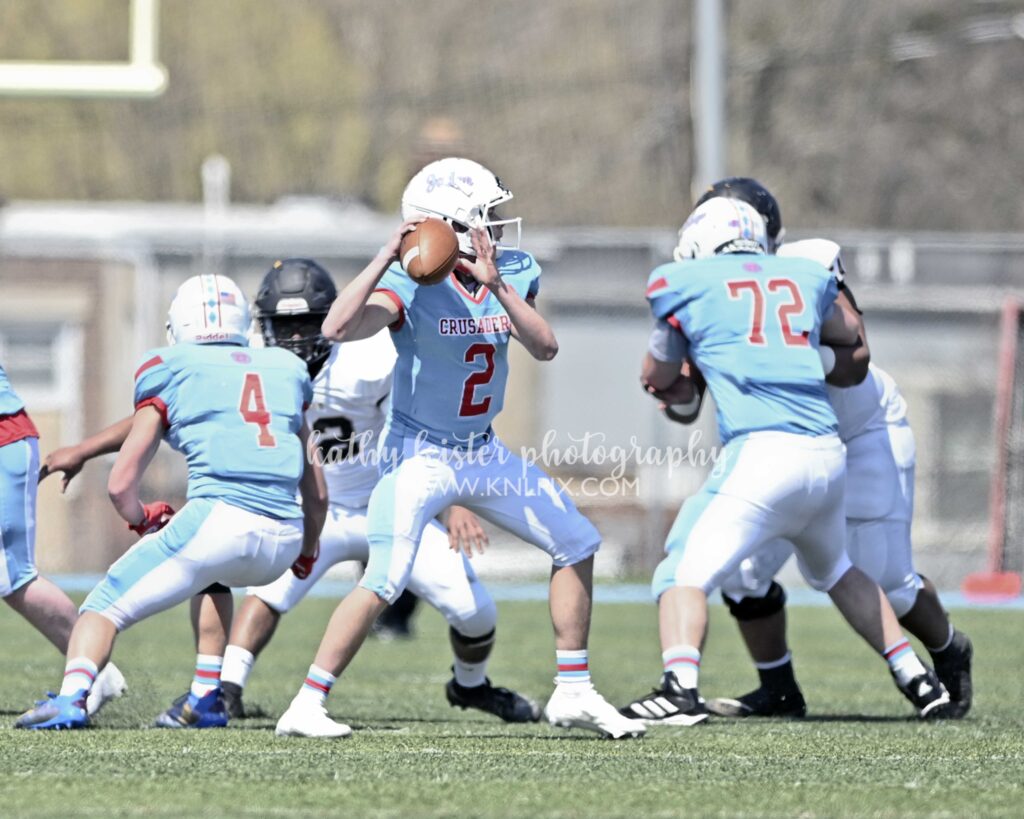 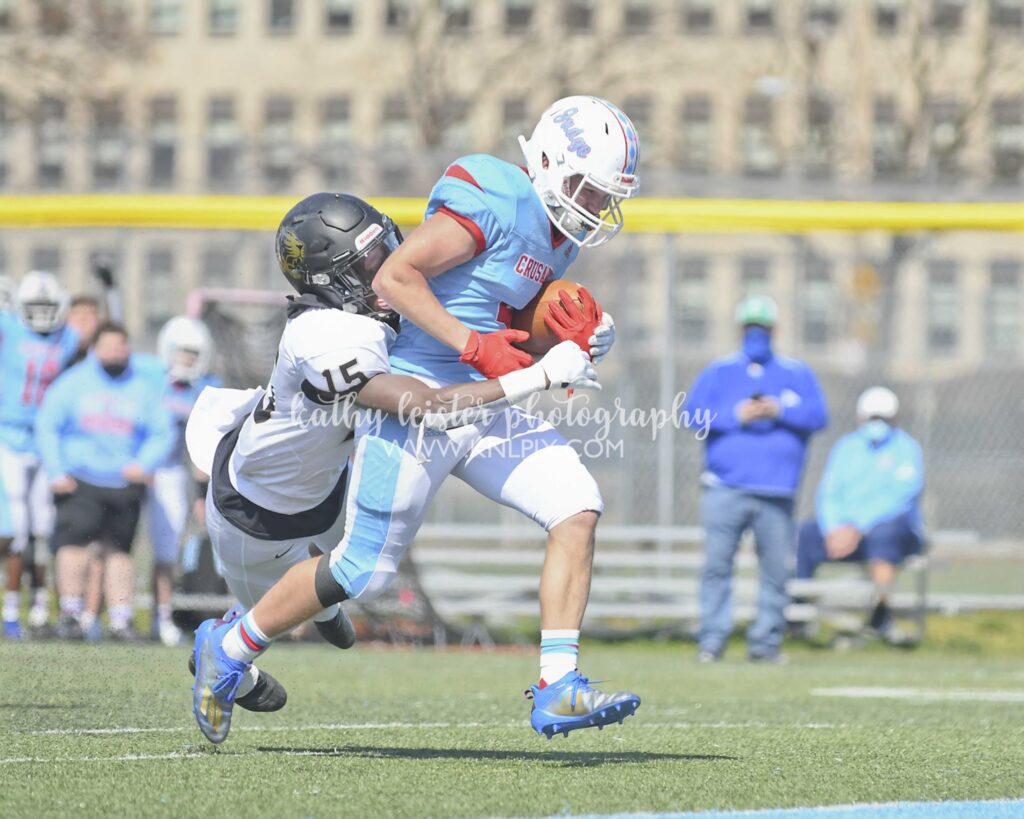 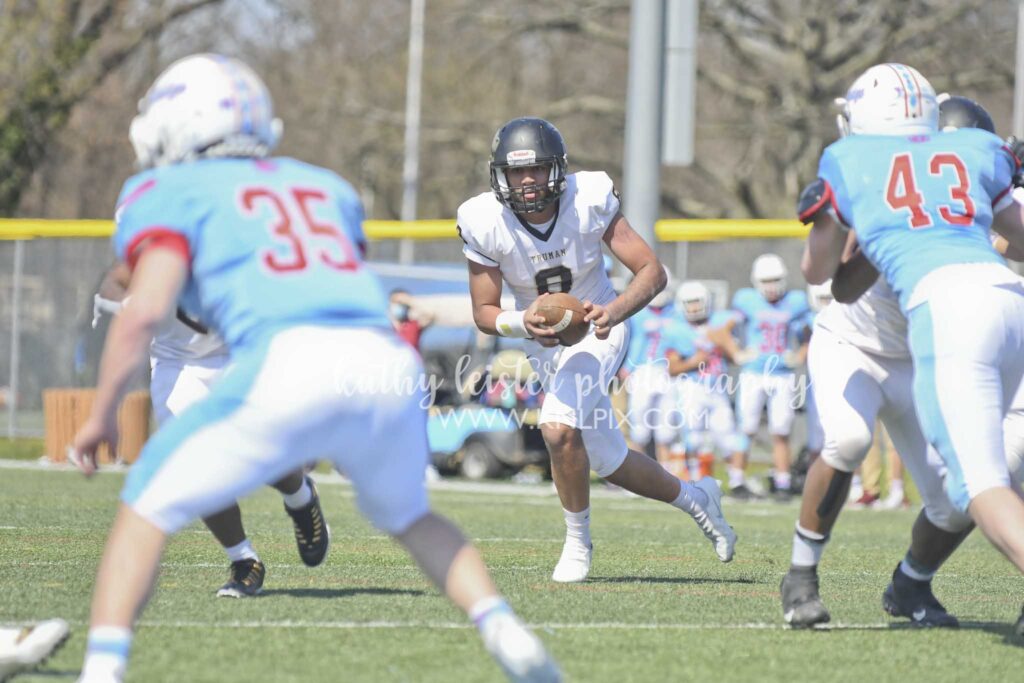 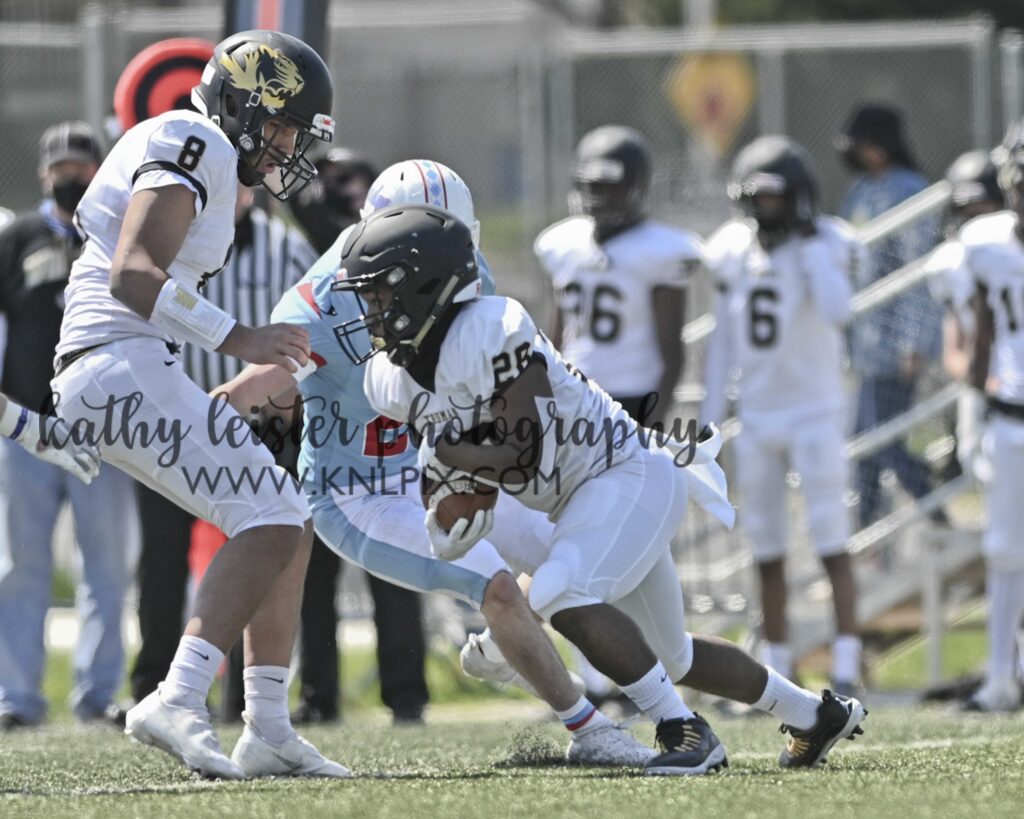 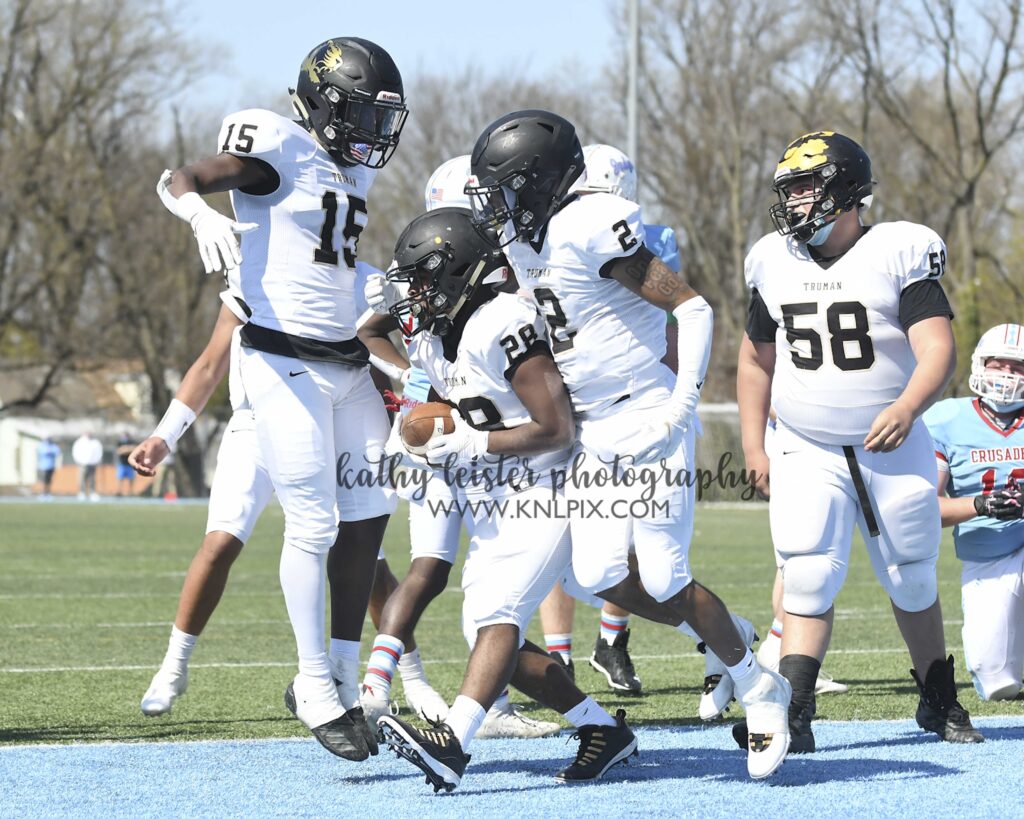 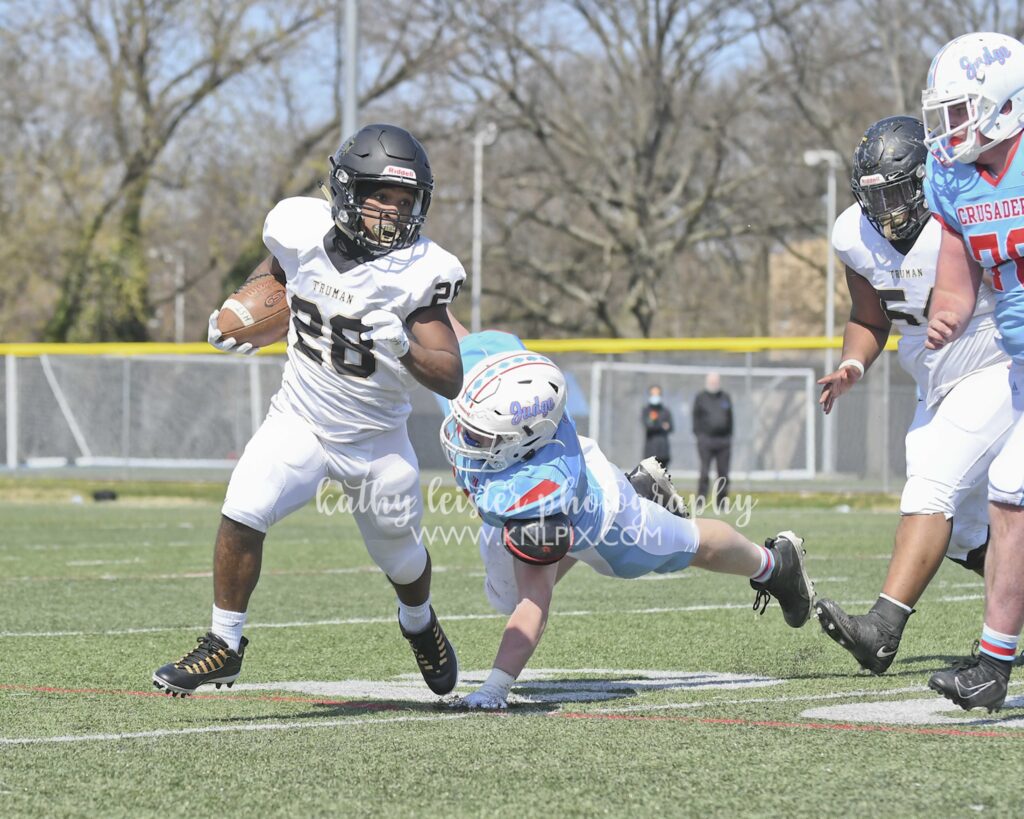 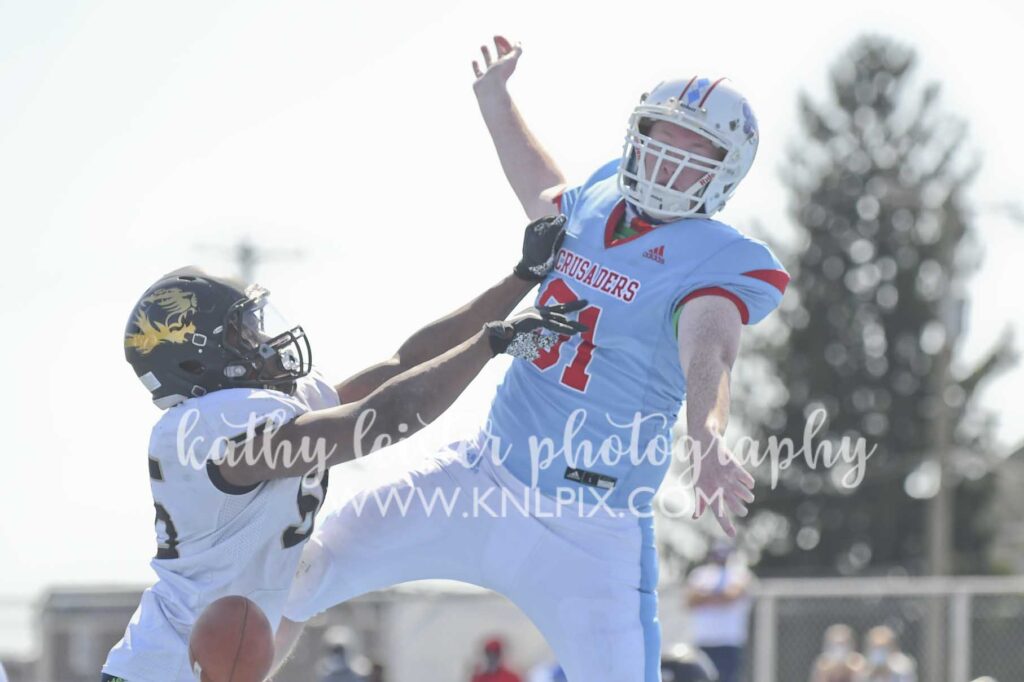 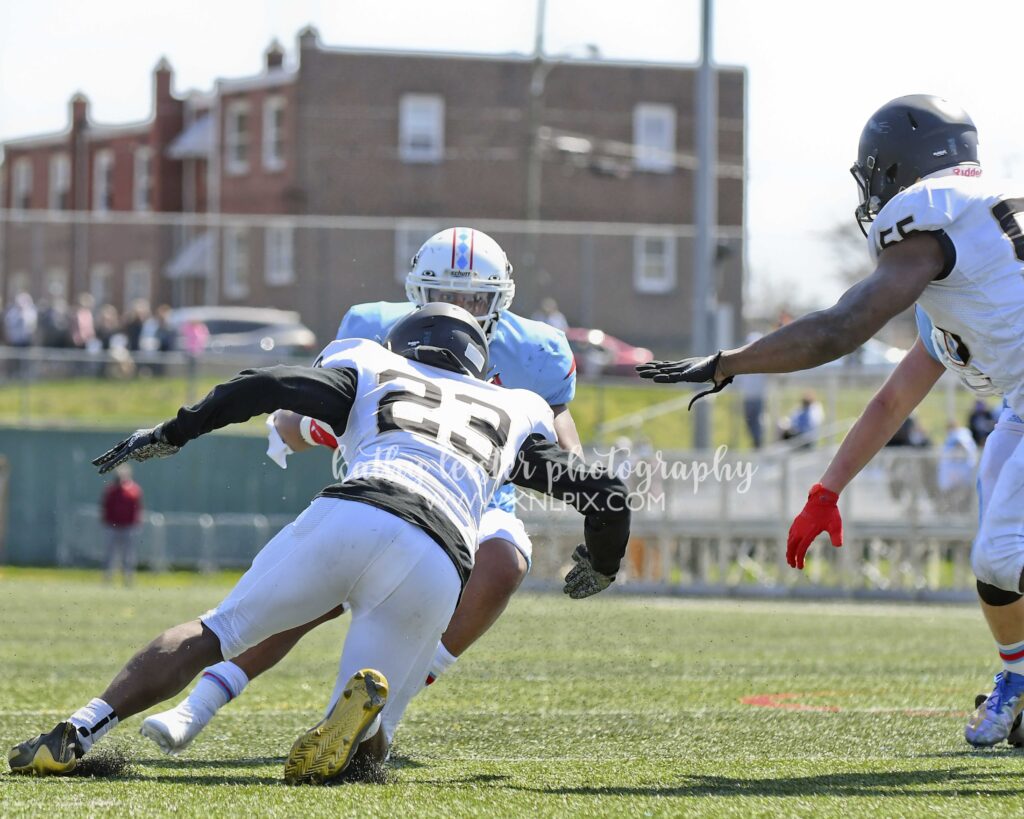