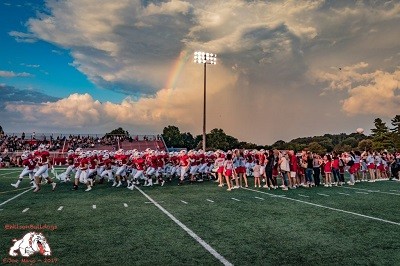 A rainbow in the sky over John Gurski Stadium as the Wilson football team takes the field prior to their non-league game vs Central Dauphin on Friday, September 15th, 2017.

The number 13 is lucky for fans of Pennsylvania high school football this year as it signifies the start of full-contact team camps across the state on Monday, August 13th. Most schools will also play their first, and possibly only, scrimmage before the week comes to an end. Yes, football really is back. Let’s take a preseason look at one of PA’s scholastic football leagues, from the south-central/southeastern part of the state, the Lancaster-Lebanon League. In 2018, Secion 1 of the League will be comprised of seven teams: Cedar Crest, Hempfield, J.P. McCaskey, Manheim Township, Penn Manor, Warwick, and Wilson.

The 2017 season saw the reign of Wilson come to an end atop Section 1 of the Lancaster-Lebanon League as a team other than the Bulldogs captured the trophy. (Wilson had won nine-consecutive championships). The regicide came at the hands (or, perhaps, bolts?) of the Manheim Township Blue Streaks, as they not only claimed the title but also stopped the Bulldogs’ 68-game Section 1 winning streak with a 38-14 victory in Week 8. Having a new defending champ isn’t the only significant change for the top tier of the LL League. Shuffling of teams across all three sections, plus the unilateral decision to institute crossover games between Sections 1 and 2, mean new faces in new places and some rekindled rivalries.

2018 Overview: Will a return to Section 1 hinder their renaissance? Time will tell but the Falcons have been on the upswing, however, they failed to conquer their biggest opponents (Manheim Central, Cocalico) during a two-year stint in the LL League’s middle tier. Will they fare better against the likes of Hempfield, Manheim Township, and Wilson? A checkmark in the “yes” column is the return of Logan Horn, set to start his fourth season as the Crest QB. You don’t see that often. Devil’s advocate? A depleted defense, with not even a handful of starters back in 2018. If the Falcons want to take home their first league title since 2001 (and first outright title since 1999) then a rebuilt defense will need to be stingier than their predecessors, who allowed 30 or more points in five games last season.

2018 Overview: 4,417. That’s the combined offensive yardage totals Hempfield lost to graduation (Mark Himmelsbach, David Martin-Robinson, Stephen Wenzel, and Zeke Rodriguez). That’s a hole the size of the Chicxulub crater. What the Black Knights use to fill that hole will determine if they can make a 2nd straight playoff appearance and 5th in the last six seasons. Working in their favor is the return of not one, not two, not three, but FOUR offensive linemen, all of which will play significant roles on defense too.

2018 Overview: The Hempfield Black Knights are not the only team recovering from massive offensive losses. Gone are the likes of Tallian Lehr, Ante Robinson, Ray Godwin, Isiah Spiller, and Anthony Deleon, who combined for 22 of the teams 36 TDs. Junior QB Ben Desmarais is the only player on the roster to have attempted a varsity pass but it appears fellow junior signal-caller Isaiah Thomas may be the man under center this season. It’s not all bad though. Their second leading receiver (Jamiere Gray) and third leading rusher (Isaiah Jackson) are back for their senior seasons and the defense returns the top two tacklers in Gray and junior Dante Wilson.

2018 Overview: The 2017 Blue Streaks were the best Manheim Township football team in decades and quite possibly the greatest in program history. What will they look like after graduation losses? Gone are the likes of QB Luke Emge (1880 yards & 24 TDs passing; 455 yards & 8 TDs rushing), RB/LB Grayson Sallade (2106 combined offensive/return yards, 23 total TDs, 62 tackles), and WR/DB Rece Bender (444 yards and 6 TDs receiving; 4 INTs and 50 tackles). However, the cupboard isn’t bare. Not by a long shot. Cameron Horst and Brett Benjamin return to lead the offense and the talk surrounding junior QB Harrison Kirk leads many to believe he’s more than capable of replacing the departed Emge. Speaking of that family, his brothers, twins Sam and Josh, were two of the Streaks most dynamic defenders… as sophomores. Now entering their second year as starters on both sides, expect them to become vocal leaders and nightmares for opposing coordinators. Can the Emge twins lead Manheim Township to twin titles? The Section 1 road runs through Neffsville.

2018 Overview: The Comets offense ran through Josiah Edwards in 2017 but he’s gone, as are Ben Wright and Cole Heckaman. It’s not just the O that’s suffering either, with Mason Sottek Michael Brown, and Taraje Whitfield graduating as well. Coach Brubaker’s Penn Manor squad has their work cut out for them in 2018 and it may be a rebuilding year, as the new QB will be an underclassman – either junior Aaron Gale or sophomore Luke Braas. The presence of senior big men Joel Stoner and Keaton Eachus along the offensive and defensive lines shouldn’t be overlooked. However, with so many starters and senior leaders departed this Comets unit is in transition and the team that calls Millersville home is likely a year away from contending.

2018 Overview: A team expected to be LL1 contenders in 2017 stumbled mid-season but rebounded late as QB Adam Ricketts gained experience following the season-ending injury to former Wilson QB Grayson Kline. With Ricketts back, as well as RB Nick Fucci, WR Trey Glass, TE Hayden Rucci (Wisconsin commit), and their best lineman (Nick Coomer, who is committed to Delaware). Better yet? The defense gets back their LB stud who missed last year due to injury: Jakob McCracken. Should coach Bob Locker’s ensemble find flanks around Coomer on offense, Warwick will challenge Manheim Township, Wilson, Hempfield, and Cedar Crest for the Section 1 crown. The expected solid season from the Warriors should get them back to the playoffs, though in 2018 they will be part of the 5A field.

As a junior in 2017, TE/LB Nick Johnson assumed a leadership role for the Bulldogs, rare for an underclassman. Johnson is one of Wilson’s most important players in 2018.

2018 Overview: The Bulldogs are in unfamiliar territory, unable to add a new championship flag to the stands at Gurski Stadium. Prior to last season you had to look 10 years earlier – 2007 – for the last time that happened. However, that season became a stepping-stone to huge accomplishments in 2008 and the beginning of a decade of dominance. Could that be in the cards this year? Anything can happen but it certainly won’t be easy, with the departure of two-year skill starters at QB and RB, Connor Uhrig and Iggy Reynoso, combined with a brutal schedule. Seniors Anthony Futrick, the main back-up last season, and Cameron Heckman will compete for the open QB spot. Junior Avanti Lockhart will take over in the backfield, which lost all-purpose back Abdul MacFoy (transfer to Berks Catholic) as well. But even a “down” year for Wilson equates to at least 7-8 wins, and that occurred just three times in the last 15 seasons… and the Bulldogs won 10 or more games 11 times in that span. Expect more of the same consistency and dominance in West Lawn in 2018, despite graduation and transfer losses. While they may not be the favorite, they should most certainly be in the hunt.

PAFootballNews.com Contributor/Reporter Joe Mays is a 2003 Wilson High School alum and has been covering the Bulldogs football program since 2010. He rebooted the old WilsonTV program, The Bulldog Hour, prior to the 2015 football season and maintains a volunteer position with the team as Social Media Strategist/Outreach Coordinator/Historical Preservation Officer. Want to talk more about Wilson football or the Lancaster-Lebanon League? Find him on Twitter @CoachJoeMays or the podcast @BulldogHour.