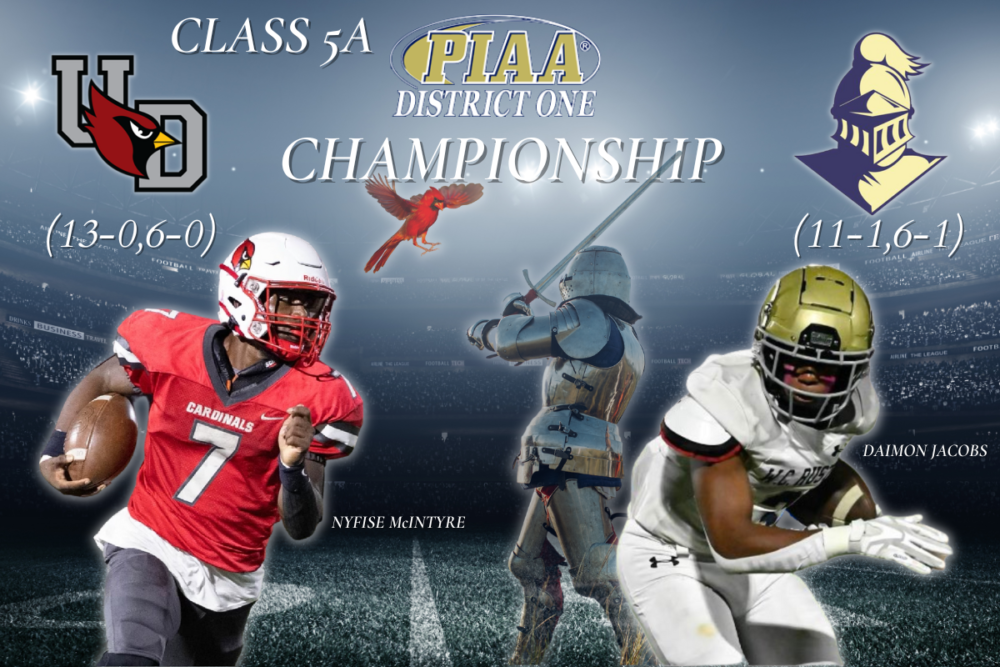 It’s championship week in some fashion all over the great state of Pennsylvania.  This week, Zak and I are headed to Forth Washington to the District One-5A Championship between (1) Upper Dublin & (3) West Chester Rustin. For some that follow closely this is the fourth meeting between these two teams over the last five seasons.  Prepare for an electrifying environment as the winner will take on the winner of the District 11/12 game in the state quarterfinal round next week at a neutral site yet to be determined.  Don’t forget to follow us on Twitter as we will be bringing live updates all game.  @ArtisticMayhem1 & @zakwolf22

League: Suburban One League-Continental Conference (5A)

Cardinals Notables: Upper Dublin enters the game undefeated at 13-0. The Flying Cards are the brackets #1 seed along with being PFN’s #1 ranked team in the statewide rankings. The Cards boast an impressive offense which averages 35.15 points per game while their defense is yielding an average of 7.15 points per. During the first three rounds the Cards are outscoring their opponents 100-0. They cruised to a 35-0 win over (16) Academy Park in round one, followed that up with a 35-0 thumping over (8) Great Valley, & last week they beat (4) Plymouth Whitemarsh 30-0. Offensively the balanced attack revolves around the arm of Senior Colin O’Sullivan who currently holds offers from Boston College and Cornell. Colin has completed 69% of his passes for 2,541 yards & 33 touchdowns & only 2 INTs. The running game features senior running back Nyfise McIntyre who has compiled 1,413 yards on the ground & 15 scores of his own. The receiving corps is a nightmare for opposing secondaries as they have compiled over 1,811 yards & 21 TDS between seniors Griffin Pensabene (645-7), DJ Ceresier (497-7), Starling Reaves (341-3), & junior Kris Kohlbrenner (328-4).  On the Defensive side of the ball, look for any number of players to make an impact. Senior DT Kyree Butler, Senior DE Riley Hackett, Junior Shyne Roberts, & Dominick Paone to patrol the 1st and 2nd levels with attentiveness, aggression, & discipline.  Kyree has 83 total tackles & 3 sacks. Riley leads the team with 8 sacks to go along with 67 total tackles. Junior Shyne Roberts is second on the team in total tackles with 64 and sacks with 6. In the secondary look for the ball hawking seniors of Chris Kohlbrenner, Starling Reaves, and the super versatile DJ Cerisier.

Golden Knights Notables: Rustin is back in the 5A championship after losing a heartbreaker in double overtime against Strath Haven last year. The Knights got their revenge, defeating Haven (2) in overtime in the semi-finals this season. Rustin lost one game all season, losing 24-14 against (6) Kennett, but defeated them in the quarterfinals 31-7. Before Kennett, Rustin blew past Radnor (14) in the opening round of the playoffs, defeating them 41-14.  The Knights boast a strong offense, using a ground and pound strategy to their advantage, averaging 295 yards per game. Rustin has two 1,000 yard rushers including Daimon Jacobs (1031) and sophomore Chase Hatton (1001). Jacobs’ older brother Dayshawn broke the Ches-mont  record for rush yards last season finishing with 2,744 yards and 42 touchdowns. Daimon got limited touches last season, but his role increased this year. The two backs spearhead an offense that averages 29 points per game. Rustin isn’t known for being a passing threat, quarterback David McClain has completed 17 passes this season for 505 yards. Rustin has been solid on both sides of the ball, the 27 points given up to Strath Haven was the most they’ve given up all season long. The Knights defense allows just 12 points per game including two shutouts. Daimon Jacobs plays both sides of the ball, leading the Knights in takeaways with 6 interceptions. Senior linebacker Connor Corrigan and Junior Merrick Seaman lead Rustin in tackles, giving the Knights a physical edge. Rustin’s rush defense came up big when they stopped Strath Haven on a two point conversion to clinch a berth in the championship round.

Game Notables: This will be the 4th meeting between these two teams in the last 5 seasons. UD holds a 2-1 lead in the series over the last five years. Senior QB Colin O’Sullivan faced WCR in 2020 and threw for 229 yards & 1 TD while completing 77% of his passes (20 of 26). Chris Kohlbrenner also saw action and had 2 interceptions, one of which he ran back for a pick 6.

*Action shot of Nyfise was supplied by Shannon O’Sullivan

*Action Shot of Daimon is from his twitter page:@daimonjacobs_

« Around District 11: The Travels of Guy & Pam Week Thirteen:  D11 Teams in Final 8 in all 6 Classes
2022 PIAA Single A Quarterfinal Preview Northern Cambria vs Canton! »